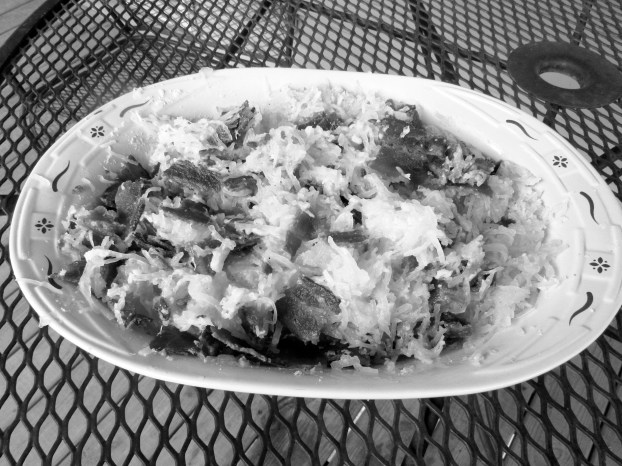 Bacon-Parmesan spaghetti squash is ‘spot on’

Several months ago I shared that a friend had given us a spaghetti squash and I’d fixed it with a marinara sauce.

We really enjoyed the spaghetti squash and Brad decided he would try growing our own in this year’s garden.

When it was garden-planting time, Brad planted one spaghetti squash plant and hoped the country critters (deer, squirrels, rabbits and raccoons) would leave it alone.

We got so excited when the actual squash appeared on the vine. We watched them grow and grow. When a couple of the squash were about the size of the one we had several months ago, we began to wonder when to pick them.

I did a little research and found the best way to determine if the squash is ready is to scrape your fingernail on the squash. If your nail penetrates the skin, it’s not ready. I wasn’t too sure about that, so I decided to ask our county agriculture agent.

My theory was if you damaged the skin of the squash, it would allow disease and pests to get into it and it would rot or something. Our agent confirmed what I had read on the Internet — gently scrape the skin/rind with your nail. If the nail penetrates the skin, it’s not ready. If your nail doesn’t dig into the skin, it’s ready to pick.

I asked him if the stem of the squash should be drying out and he said no and to cut the squash off the vine instead of just pulling it off. If the stem is jagged when you remove the squash, it can allow disease to set in.

He also let me know that I if I wasn’t going to use the squash right away, to just leave it outside for about 10 days and let it dry a bit. I could then bring it into the house and keep it in a cool spot (my basement, not the refrigerator). He said his dad does this and has been able to have home-grown squash well into the winter.

When I got home, I headed to the garden to do the scratch test. Sure enough, my nail didn’t penetrate the outside of the two grown squash that we had.

I didn’t have a knife with me and I knew these squash weren’t going to be around long, so I went ahead and just pulled them off the vine. I did let the squash sit out on the back porch for a few days before pulling this week’s recipe from my file.

I found this recipe at homecookingmemories.com.

When I read the recipe, I knew it was something I would try since we had spaghetti squash growing in the garden and the recipe included Brad’s favorite: bacon.

The first time I fixed spaghetti squash, the author of the recipe said to just cut the thing in half, length wise, pour a little olive oil on the cut sides, sprinkle with salt and pepper and bake it on a rimmed cookie sheet.

That seemed easier than how this recipe said to bake the squash. The rind of spaghetti squash is pretty hard to cut and I thought cutting it one time would be easier and faster than cutting it into several rings. Plus, there was less chance of the squash slipping and me cutting my hand or fingers. I did not want to end up in the emergency room.

After reading the recipe, I decided instead of frying the bacon, I’d do my usual and just cook it in the oven until it was crispy and then crumble it up. Since I have a two ovens, I put a pan of bacon in each one and then weighed the two squash I harvested. One was a little bigger than the other and it was about the right size for this recipe.

Now I was ready to tackle cutting the squash. To keep the squash from slipping around, I bundled it up on a clean dish towel, grabbed my sharpest and longest knife and went to work cutting it in half.

Be careful doing this, it’s a little tricky since the rind is tough and the thing is oblong. I used a spoon to scrape out the loose stringy stuff and the seeds. When I was satisfied I had enough of that scraped out, I pulled out a rimmed cookie sheet and oiled, salted and peppered the cut side of the squash.

I poured some water on the cookie sheet to help steam the squash while it cooked (something else the other recipe suggested).

When one of the pans of bacon was ready, I turned up the heat on the oven and put the squash in to cook. I also tented the squash with aluminum foil to help speed the cooking process.

About the time I put the squash in the oven, the second pan of bacon was ready.

I let the bacon cool while I shredded the Parmesan cheese. You probably could use the pre-shredded or grated kind if you want, but since I had a chunk of “real Parmesan” in the refrigerator, I used that.

This was going to be our main dish for supper. While I was waiting for the squash to finish cooking, I remembered we had a little bit of grilled chicken leftover from the night before. I decided to heat it up, just in case this recipe was a flop.

After about 45 minutes, I checked the squash by turning it over and sticking a fork in it. Since the fork pierced the flesh to the rind, it was done. I pulled it out of the oven and let it cool for about 5 minutes before I started shredding it with a fork.

The shredding took a little bit of time — you shred from side to side not top to bottom to get the spaghetti like strands. As I shredded the squash, I placed it in a large bowl.

When I had all of the squash shredded, I cubed a half-stick of butter and stirred it into the squash. You will note the recipe says to use 1/4 cup butter (8 tablespoons, or a full stick of butter, is a 1/2 cup).

I then added the Parmesan and crumbled bacon. I didn’t add the salt and pepper at this point. Everyone has differing tastes when it comes to salt and pepper; I like more salt, Brad likes more pepper, so we could each season it to our liking at the table.

As we sat down to eat and Brad said a prayer, we both commented that the dish looked pretty and smelled good too.

Brad served himself and before I could serve myself he had already taken a bite and said it was good.

I asked him what he liked about it and he said the Parmesan and bacon flavors together were spot on. After taking a bite, I had to agree with him. Brad did add a little pepper to his portions, but neither of us thought it needed additional salt.

I nailed this dish and look forward to making it again when the last two squash on the vine are ripe.

We have already decided Brad will plant more than one spaghetti squash plant next year.

— Salt and pepper to taste

Carefully cut stem-end off the spaghetti squash and discard. Cut squash into approximate 1-inch-wide rings, width-wise. With a spoon or tip of a knife, gently remove seeds and pulp from each ring; discard.

Place spaghetti squash rings lying down on prepared baking sheet. Bake in oven for about 40-45 minutes or until strands separate easily when scraped with a fork.

While the spaghetti squash is baking, cut bacon into pieces and cook in a large skillet over medium heat, moving and turning frequently, until bacon is fully cooked and crispy. With a slotted spoon, remove bacon pieces from skillet and set aside.

Remove the spaghetti squash from the oven and allow to cool slightly. Remove shells of each ring and separate strands with a fork. Place strands in a large bowl.

Add butter to warm spaghetti squash (if strands have cooled too much, heat in the microwave a bit) and toss with the strands until the butter is fully melted and incorporated.

Stir in Parmesan cheese and bacon crumbles. Season with salt and pepper and serve.

By Sarah Condley We were having another church social and this time everyone was asked to bake a cake to... read more