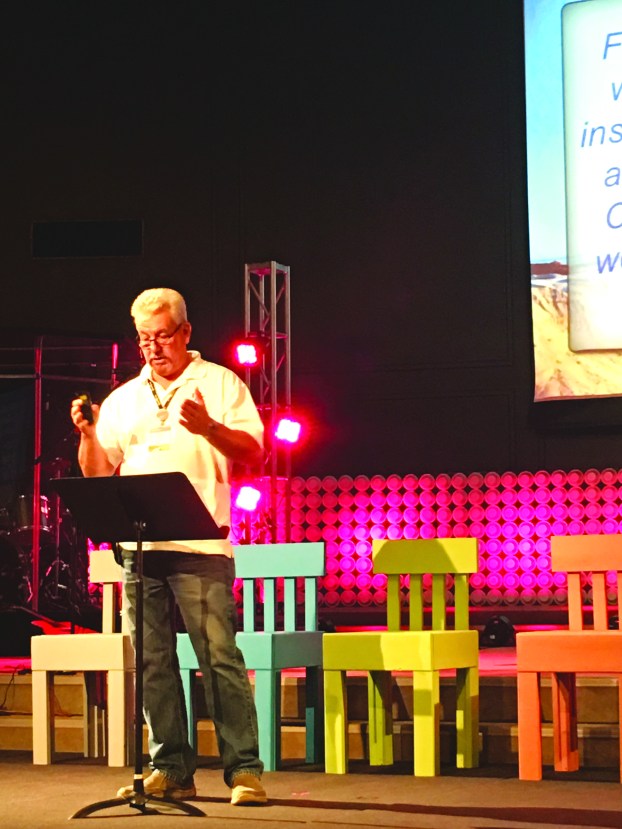 Those words can encompass an untold number of issues any person may be dealing with, and Celebrate Recovery at Calvary Christian Church has a place for all of them.

Celebrate Recovery is a national ministry that began in 2001. It follows a 12-step program similar to many secular organizations, but is Christ-centered. Winchester’s oldest chapter began in 2007 under the leadership of Dickie Everman.

Everman, the adult discipleship and recovery minister at Calvary Christian, is no stranger to addiction and recovery himself.

“I struggled with alcohol and drugs,” Everman said. “Mostly alcohol, but drugs were always a part of my life. I grew up in the 1970s, so it all went together.”

Everman said in his 20s, he got deep into the drug culture. He was able to pull himself away when he realized that wasn’t where he wanted to be. As a result, his drinking escalated, playing a role in a divorce from his first wife.

Everman eventually met his current wife, JuaNita, while drinking in a bar. He says it was one of the first steps on his road to recovery.

“We married in 1990,” Dickie Everman said. “Finally, in 1996, I had had enough. I can’t tell you what changed because I really don’t know. I think God just woke me up one day and said, ‘You’re gonna die if you continue this path.’”

He checked himself into an outpatient recovery center and worked with a secular group to break his dependency on alcohol, but Everman said he felt the need to assist others on their journey to recovery.

During that time, he and JuaNita became active at Calvary Christian and decided to start a Christ-centered recovery program there.

The group was initially called Recovery Through Christ.

“I had seen too many people who had years of sobriety and end up going back out,” Everman said.

Recovery Through Christ was built from scratch at the church, but the members later switched to Celebrate Recovery upon learning about it.

“I knew nothing about Celebrate Recovery, but my friend told me about it and we ordered a starter kit,” Everman said. “When we got it in, I loved it because it was for all sorts of hurts, habits and hangups, not just drugs and alcohol.”

He said the flexibility of CR appealed to him and other members of the existing group, many of whom have been in recovery from some issues for years but are facing new ones.

“God relieved the desire for me to drink and drug a long time ago,” Everman said. “But I’ve struggled with anger issues, control issues, other life things. I’ve been able to use the steps to get me back on the right track where I need to be.”

The church officially launched its chapter of Celebrate Recovery in October 2007. Initially, the program had a small group that met in Calvary Christian School’s gym loft. A decade later, Everman said hundreds have been through the program, with groups ranging from 70 to 100 people filling the church’s sanctuary every Tuesday.

Everman said part of what makes Celebrate Recovery effective is its specific structure. The entire group present on a Tuesday will eat, sing and worship together at the beginning of the program.

“Then we either have a testimony from someone who’s been through the program or we have a lesson based on the 12 steps,” Everman said.

That format has been consistent every Tuesday for 10 years, with only one night during that time cancelled because of bad weather.

People then are split up into different groups based on age, gender and issue.

Children are welcome to come to Celebrate Recovery, but they are put in a group of other children their age known as the Celebration Place, with age-appropriate lessons. Likewise, teens come together in a group called The Landing, which deals with problems they may be facing in their lives.

Adults join groups of the same gender who are facing generally similar struggles. For instance, there are groups that focus on substance abuse, codependency, depression or other mental health conditions and sexual or fidelity challenges, to name a few. New small groups are added as the program grows.

Everman said the separation is done with purpose. It helps make people feel more comfortable being vulnerable and open about the problems they are having in their lives.

“A lot of times men will just refuse to allow themselves to be vulnerable in front of women, no matter what,” Everman said. “The same is true of women, too. People just don’t feel comfortable talking about certain subjects in front of the opposite sex.”

Everman said he has heard about numerous different hurts people are suffering from during his time coordinating the ministry. Some are problems most people seem to struggle with, but others have taken him by surprise, like the sheer number of sexual and physical abuse stories that have been told among the groups.

“One of the biggest ones I’ve seen recently is pornography,” he said. “Men and women struggle with that. But you also have everyday struggles where you’re enabling someone to get in trouble, trying to control them. It may be affecting your life so much that it begins dragging you down.”

Mary Jane Wills said enabling and codependency were what initially brought her to CR on a Tuesday night in 2009.

“I actually came to try and help someone else,” Wills said. “But in the end, I was the one who needed help.”

Wills ended up joining a group about codependency to talk with others about the problems she had been having with family members. It was there she began to come to grips with the fact she could not force others to be the way she wanted them to be.

“One of the steps is to realize you are powerless,” Wills said. “I had to realize that I was powerless to control others and that they make their own decisions in life.”

Continuing her journey toward recovery, Wills took part in a step class, an intense, often year-long project done with a small group to try to understand the 12 steps and how they relate specifically to the issues the individual is facing.

Everman said the process for step classes can be emotionally and mentally trying for participants. Completing it brings rewards on several different levels.

“I guarantee everyone that if they stick with it, they will see a miracle in their life,” Everman said.

The participants in a step class often become very close because in many instances they have shared things with each other they have never told anyone else.

Wills said her group, like many others, continues to meet up once a month.

“We call each other ‘step sisters,’” Wills said. “They’ve gone on to do different things, attend different churches and work with different groups, but we still talk and we still see each other every month.”

The group and community aspect of CR also helps give the individual members perspective about people they may otherwise have judged negatively, Everman said.

“I think it brings people in and they realize people who struggle with drugs and alcohol are just like anybody else struggling  with anger issues or control issues,” Everman said. “You think of the alcoholic or a drug addict as someone living under a bridge with a paper bag with a drink or a drug in it or whatever but that’s not the case. It doesn’t matter how much money you have or how little you have. It does break that stigma that it can happen to anyone.”

He said a prime example of the threat addiction poses can be found by reading about people who were prescribed pain medication for legitimate medical problems only to later become addicted to the pills they once needed.

It can happen to anyone

The danger never fully goes away either, despite how long someone has been in recovery.

“I had one good friend who was clean for years and he went back out there,” Everman said. “He’s still out there. That was probably five years ago. He’ll probably die from it, and that’s unfortunate.”

In other cases, addiction comes out of trying to cover up another kind of pain.

Les Farrell, who has been with the program since 2012, said he and his wife Cindy had a good life together in North Carolina in the 1990s. Both of them were active in their local church and were raising several children together.

Things fell apart, however, when the couple lost their youngest son to leukemia when he was about 10 years old.

“He was diagnosed in September, and we buried him in January,” Farrell said.

The death had lasting marks on Farrell’s family, and eventually, he and his wife divorced.

“One of the most painful memories is the sense of how powerless I was,” Farrell said. “I was wounded, and I pushed a lot of feelings down and was just not dealing with them.”

After a while, Farrell left the rest of his family and threw himself into his work, living as an electrician traveling around the country and sleeping in his work truck. During that time, he became a heavy drinker.

By 2005, Farrell had made his way to Winchester, where he became a regular at a local bar.

“I used to close the place out every Friday and Saturday,” he said.

But it was in that bar where Farrell had what he considers a turning point in his life.

“It was close to New Years in 2005, and everyone there was getting together and laughing, having a good time,” he said. “But I knew that behind all that laughter was brokenness. I knew those people’s issues, and they knew mine. I made a resolution that year to try and get back in touch with the God I had left behind.”

Farrell began his recovery at Calvary Christian before getting involved with Celebrate Recovery. He said over time he was able to reconnect with his children, and slowly but surely he and Cindy reconciled, began dating and remarried, moving to Winchester for a fresh start.

It was only after the couple got back together that they became involved in CR, and they saw it as nothing short of a divine calling.

“When we heard about it and what it was, my wife turned to me and said, This is what we’re supposed to be doing,’” Farrell said.

The two now volunteer with the program regularly, with Cindy overseeing the Celebration Place and Les driving a shuttle to assist those with transportation needs.

Volunteering is a key component of the Celebrate Recovery model. Those who go through the program often become volunteers to help others along their journey. Some make flyers, others lead groups and still more work as greeters or give testimonials.

After completing her step study, Wills began leading other studies for newer members, some of whom are dealing with the same problems she was when she first came through the group’s door.

Wills is also in charge of training leaders in the program, familiarizing them with the literature CR uses, the organization and the strategies for leading group discussions.

Everman and his wife, who has also been in recovery for several years, keep the organization flowing smoothly, looking after the needs of their various leaders.

Everman said the program at Calvary Christian has been so successful two more branches have grown out of it at nearby locations, one in Mount Sterling and one at Grace Baptist in Clark County.

“It’s a great program and I can’t say enough about it,” Everman said. “There are so many hurting people out there and our world just seems to get worse and worse.”

Strode Station Elementary students got a glimpse into the lives of the men and women who keep their community safe... read more