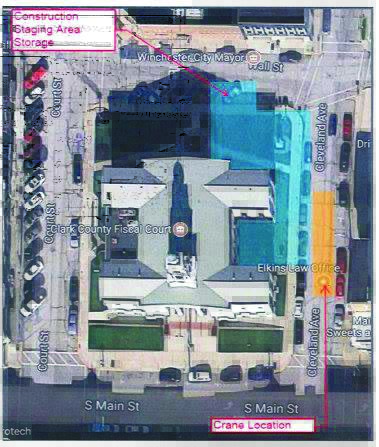 An aerial view of the Clark County Courthouse shows the location of a crane (bottom left corner) that will be used during construction while the courthouse’s bell tower is repaired. The project is expected to begin Oct. 15 and Cleveland Avenue (pictured in yellow) from Main Street will be blocked from traffic. The blue area indicates where other construction activity, including a staging area and storage, will take place.

In little more than two weeks, the public will have to find another way to get to courthouse square from Main Street.

The closure is part of the courthouse bell tower replacement project, which will take about two months this fall and another couple months in the spring, he said.

The project will replace the deteriorating bell tower atop the courthouse, which also leaks into the courthouse when it rains. While a new tower is constructed off-site, a temporary roof will be installed, which should resolve the leaks.

Branham said the crane will be parked on Cleveland Avenue next to the courthouse, which will block access to the courthouse square through December. Construction materials and supplies will also be stored on the courthouse lawn. The entire area will be fenced off as well.

The sidewalk in front of the McEldowney building and the courthouse annex will remain open, he said.

Drivers, though, will have a harder time. From Main Street, drivers will have to turn on West Broadway Street, pass the Clark County Sheriff’s Office and turn onto Wall Street, he said.

Branham said he’d like to see some kind of warning sign for motorists on North Main to alert them before they get to the courthouse.

The Winchester Board of Commissioners has already approved the street closure.

Replacing the bell tower is projected to cost $751,015 by Structural Systems Repair Group. An anonymous donor contributed more than $21,000 for gold leaf on the finished tower.

The project is expected to be finished in the spring.

Donna Fuller was only going to be the chairperson for Clark County’s Junior Miss program for one year. More than... read more