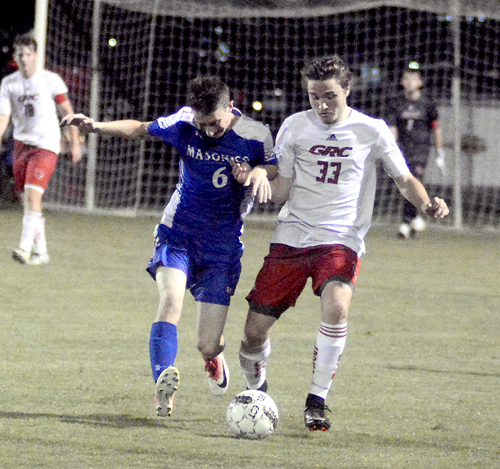 The Cardinals honored their upper-classmen then blanked visiting Mason County, 4-0.

Josh Bailey broke a scoreless tie about midway through the first half, shooting one past the Mason keeper for a 1-0 lead.

GRC scored three in the second half, two off the foot of Clayton Parks and one from Aaron Paynter.

John Janes, Dallas Wingert and Parks each had assists with Wingert earning two.

Prior to the game, the team honored 10 seniors.

“I knew the day would come and it’s pretty sad for me,” GRC coach Walter Ridener said. “These guys have been through the thick and thin of this thing. I started out wanting to change some things about the mindset of this program. A lot of people didn’t want to come here to play. A lot of referees didn’t want to come here all because of the way the fans treated them, the way the players treated them.

“These guys bought in and stuck with it. A lot of them have played since they were freshmen. I had to play freshmen my first year.”

And that loyalty is paying off. The Cardinals improved to 10-3 on the year with the victory, behind nonstop offensive pressure and a confident defense.

“This might be the best defense I’ve had since I’ve been here,” Ridener said. “They’re pretty good. They weren’t really threatened tonight.”

Ridener has watched all the seniors grow and develop as players.

“They’ve come a long way,” he said. “Houston (Goodman) had never played soccer before (he joined the team) and now he’s one of the best defenders in the region. Parks hadn’t played much and look what he’s turned into. Dallas had very few touches. I’m proud of them.”

Parks leads the team in goals scored with 27. Bailey averages a goal a game with 13 on the season while being a workhorse in the middle.

“He (Bailey) likes having the ball on his foot — maybe a little bit too much,” Ridener said. “Like tonight, he was playing back on defense and we had to force him back up because he was going to be sucked in. He just wants to be where the action is. He’s come a long  way.”

Senior Hunter Caudill was pulled off with the other seniors in the final minutes or else would have earned a complete game shutout in goal.

“He’s been sick and injured a bit this season,” Ridener said. “He hasn’t played as many games as I’ve wanted. He’s probably one of the better keepers.”

The road doesn’t get any easier as the season winds down. The Cardinals face off against  Tates Creek in Lexington Thursday.

The Commodores (9-4) are No 16 in the coaches poll and will likely be looking to right the ship after dropping three straight games to Lexington schools over the past week.

“That one should test us,” Ridener said.

GRC returns home for the final two games of the regular season next week, facing Berea Monday and Conner Tuesday.