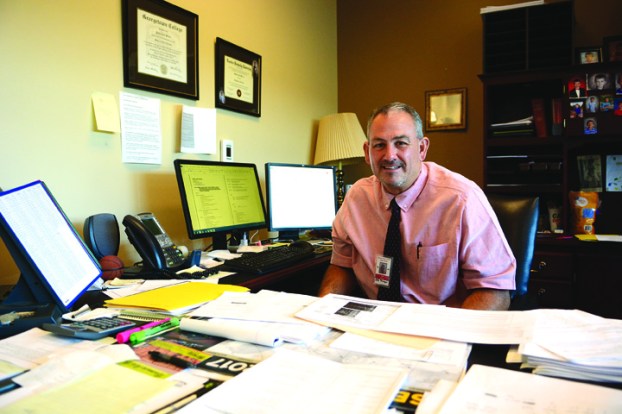 Todd Wilson has returned to his home county to serve as principal of the Area Technology Center. (Photo by Seth Littrell)

For Todd Wilson, accepting a position as the principal of Clark County’s Area Technology Center was more than just taking a new job, it was a homecoming.

In addition to previously serving on the Clark County Board of Education, Wilson has more than 24 years experience as an educator, with 15 years as an administrator in various school districts across the region, including Bath, Montgomery and Madison counties. Wilson worked in Clark County as well from 1998 to 2002, as a physical education and health teacher at Clark Middle School and coaching at the same time.

“I’ve coached just about every sport except soccer and baseball,” Wilson said. “And soccer wasn’t really as popular when I was coaching.”

During his time coaching tennis in Clark County, Wilson said he was able to take the team to the state championship for the first time.

But Wilson isn’t only focused on sports, and said his goal as an administrator has been to teach students to be well-rounded problem solvers no matter what they decide to do after graduation. That, he said, is why he has always loved the ATC.

“I really think it’s a track that we as educators know is there, but I don’t know if we use it to the fullest of its ability,” Wilson said. “Sometimes it’s not funded the way it should be. It’s a great program. A kid can walk out of here in four years with a certificate and start somewhere making between $40,000 and $60,000 if they want to.”

Wilson said the ATC is working to create an industrial maintenance pathway allowing students to learn how to maintain and engineer large commercial machines. He said during his tenure he would like to see the facility expand the programs it offers and has talked with Superintendent Paul Christy about some possibilities.

Wilson also said a goal of his is to get the ATC more active in the community through internship and apprenticeship opportunities as well as potential service projects. He said the goal is to create well-rounded members of the workforce who can excel in jobs after graduation.

“We’re not just trying to create employees for certain places across town,” Wilson said. “We want our graduates to be employable across the country.”

Wilson said while he is still finding his bearings in the new position, he is impressed by ATC staff and looks forward to working with them to create opportunities for students.