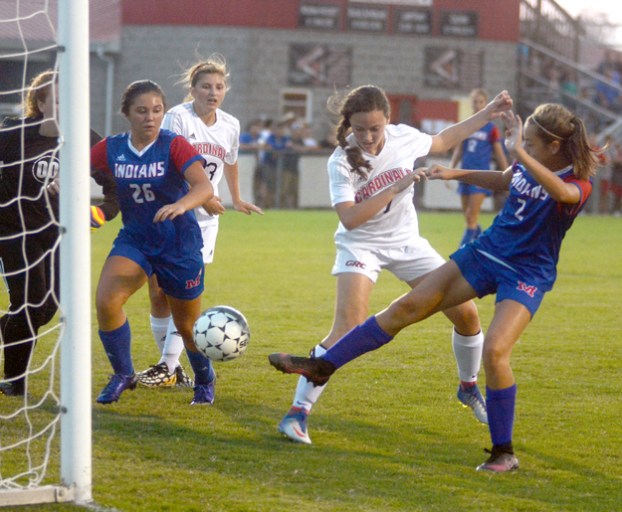 The Cardinals completed a perfect 3-0 run through the league with an 11-1 victory over visiting Montgomery County Wednesday night.

The win gives the Cards the No. 1 seed in the upcoming district tournament. GRC outscored Paris, Bourbon County and Montgomery by a combined 29-1 in the three games.

“That’s what you want to do,” GRC coach Matthew Abner said. “You want to play your best games against your district competition. That’s who you’re going to go up against once the season is over.”

The Cardinals won’t just have the top seed in the district tournament, which will be held at Montgomery this year, but will have a chance to be region tournament hosts if they win the 39th.

“This helps us get where we want,” Abner said. “We have the No. 1 seed in the district. That makes things a little easier.”

Four minutes into Wednesday’s contest, Haley Hannan scored to put GRC up 1-0. The Indians fired back just a minute later, scoring off a corner kick.

It was all GRC from there.

With 30 minutes left in the first, Delaney Manning scored with a header off a corner kick to put the Cardinals back in front.

Manning scored again, this time off an assist from Leslie Hernandez. Madeline Mann put in a goal thanks to an assist from Meaghan Curren and the Cardinals were up 7-1 at halftime.

Shelby Benson got the scoring started in the second half. Manning scored twice more and Taylor Kelly put the finishing touches on the mercy-rule win in the waning seconds of the second half with a score.

“The teamwork was really good today,” Abner said. “I didn’t see any players being selfish by taking too many shots. They were distributing the ball well. We have all season.

“Even girls who really wanted to get a goal were giving up good opportunities to someone who had a better one. That’s how you end up with an 11-1 score.”

GRC has three games left in the regular season, all of which are on the road.