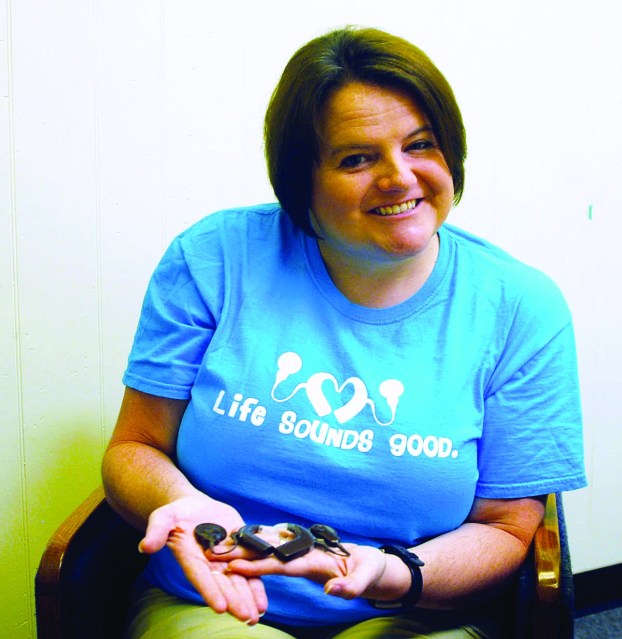 Winchester resident Jess Toews holds the devices which allow her to hear again after eight years of being deaf. She received a cochlear implant in her right ear in February. In August, she went through an auditory brainstem implant in her left ear. (Photo by Fred Petke)

Eight years ago, Jess Toews discovered she was losing her hearing.

She was diagnosed with type 2 neurofibromatosis, a condition where tumors grow at nerve ends. Since 2009, two huge tumors grew on her auditory nerves, first on her left and then her right. Surgery removed the tumor, which was pressing on her brain stem, and her hearing, on her left side.

As time passed, her hearing in her right ear continued to weaken.

Today, Toews is hearing in both ears after receiving a cochlear implant for her right ear in February and an auditory brain stem implant in August for her left.

“I’ll say life is a lot better when you can hear.”

Cochlear implants, she said, are connected directly to the cochlea inside the ear.

The auditory brain stem implant bypasses all the nerves in the ear and connects to her brain stem, she said.

Toews said doctors actually recommended her for an auditory brain stem implant in 2009, but her insurance refused to cover it. The equipment itself, she said, was $150,000.

In 2009, doctors simply removed the tumor.

This year, Toews said it was completely covered. The surgery and recovery went better than expected.

A 16-hour surgery turned out to take only nine, she said. There were no complications.

“When they test it during surgery, most people only respond around 60 percent,” she said. “Mine was responding at 90 percent.

“The doctors told me this was the most perfect surgery they’ve ever done.”

At this point, Toews can hear speech and other sounds only in her right ear. The brain stem implant transmits a series of beeps until her brain learns to hear again.

“What a blessing it was when I heard that first beep,” she said. “Maybe that was something God wanted me to learn in eight years. Maybe I appreciate it more now.”

Now, Toews gets to hear everything.

In March, she heard her two children say “I love you” for the first time.

“I’m finding all kinds of fun things,” she said, “like the turn signals in the car make noise. Baseball games are really loud. It’s a whole new journey of what everything sounds like.”

Toews has also connected with others who have received the same brain stem implants.

“How fun is it that we’ve made our own little support group?” she said.

The best, she said, is being able to hear her children.

“I’ll ask my husband, ‘Why am I so special that God decided to give my hearing back?’” she said. “I feel so lucky, so blessed with this amazing gift.

“You don’t take anything for granted. Nothing … kids’ laughs and screams and cries can be annoying but you may not have it tomorrow.”

For Todd Wilson, accepting a position as the principal of Clark County’s Area Technology Center was more than just taking... read more