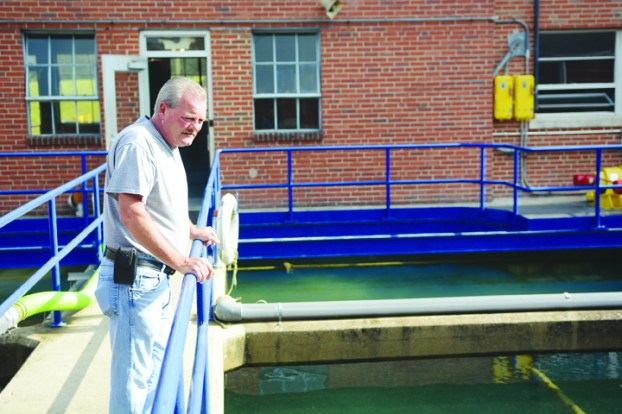 For more than 30 years, Verlon Johnson has been making sure the water flowing to homes in Winchester has been clean enough to drink.

Johnson is the supervisor of Winchester Municipal Utilities’ water treatment plant on Water Works Road. The facility, an old stone building nestled into a hillside near the county reservoir, has been a fixture in Johnson’s life since he was a young man.

“A long time ago I had just settled down and started a family, and I knew I was going to need a stable job,” Johnson said. “I put in an application with WMU, Kentucky Utilities, East Kentucky Power and others, and WMU was the first one to call me back.”

Though Johnson said he initially didn’t think he would succeed working at the plant, he eventually learned the ropes and advanced enough to become the plant’s supervisor before retiring. His knowledge and experience were so valuable that he was requested to come out of retirement by WMU when the plant found itself shorthanded and in need of skilled help.

Johnson doesn’t mind returning to work though. In fact, he says this is an exciting time for WMU because plans to build a new plant have been finalized, and the commission is looking to begin bidding out the project for construction in the near future.

A building full of history

The existing water plant in Clark County was first constructed in 1891 under the name Winchester Water Works. After being acquired by the city in the 1950s, the facility underwent a number of upgrades as well as some expansion.

“This plant has a lot of history in it,” Johnson said. “The original 12-inch water pipe that was installed in 1891 is still in use today.”

The pipe is an example of how the aging treatment plant has operated for some time, making do with the equipment at hand to meet the needs of the community. While not as old as the intake pipe, the facility also still uses several pumps the city purchased and installed in the 1950s

Generally speaking, the water plant is able to purify water using the same process as many modern-day plants do.

In fact, the new water plant planned to be built on the property near the Lower Howard’s Creek Wastewater Treatment Plant off Boonesboro Road, will largely use the same process to purify water.

First, the water is pumped in from the Kentucky River near Dam 10 on the border of Madison and Clark counties. When the water first enters the plant it gets put through what’s known as a flash mix, where chlorine and chemicals are introduced to kill bacteria that may be in the water. The flash mix lasts about 45 seconds, Johnson said. Flow then goes to a flocculation basin where flocculent, a clay-like substance, mingles with the particulates in the water. The particulates bond with the clay until the mass becomes so heavy it sinks to the bottom of the pool, allowing the clean water to flow through large filters made of anthracite coal, sand and gravel.

“That catches more of the fine particles in the water,” Flynn said. “It’s basically a larger version of what someone might have at their house.”

Water then goes to one of several clear wells, where it is treated again with chlorine, which Johnson said was an integral but dangerous part of Winchester’s water purification process for the employees. When handling either of the plant’s large chlorine tanks, Johnson said workers must have someone else with them. The tanks are kept in a closed off area of the plant, and if something dangerous were to happen, like a leak, it is important to have someone nearby who can immediately assist or call for help.

“It was invented in World War I to kill people, now we use it to clean water,” Johnson said. “At the new plant, we’ll be switching to bleach. It’s much safer to use.”

Once the water leaves the clearing wells, it is pumped to a basin where it stays until it is sent to town.

But the devil is in the details, and several factors have made operating the plant a challenge for Johnson and his workers.

“If you can treat water here, you can do it anywhere,” Johnson said.

The most pressing problem for the plant is the growth Winchester has experienced since its last upgrade in 1972. Since that time, water usage has continued to increase until now the plant is operating near its capacity of about 5 million gallons per day (MGD) on a 24-hour basis, even exceeding capacity occasionally when necessary.

“We were the first water plant in the state to be given permission to operate past capacity,” Johnson said. “So we can go up to 6 million gallons, but we couldn’t stay there for long before it would start causing problems.”

Problems could be mechanical issues that arise from overuse, but mainly what Johnson is concerned about is water quality, which suffers when water is flown through the plant quickly.

For example, Johnson said when he first began working at the plant, water would regularly sit in the flocculation basins for up to eight hours, giving more time for particulate matter to bond with the flocculent and sink to the bottom of the pools. Now, water typically only sits in the basins for about two hours. The water is still cleaned through a filter and is still well within the state’s water quality guidelines for consumption, but the process is still given much less time than it was.

According to WMU plans, the new plant will have a capacity of 9 MGD. Johnson said a benefit to the increased capacity is the water can be more thoroughly treated.

Because the plant has been approved to increase its flow beyond its capacity, the state requires WMU to test the quality of the water it purifies every four hours.

“We go ahead and do it every two hours,” Johnson said. “That way if something bad does happen we know quickly and can be on top of it to mitigate.”

The constant testing keeps operators on their toes though, in addition to all the parts of the job they have to do manually that are automated in more modern plants.

WMU employs about a dozen people at the water treatment plant, all of whom must have the appropriate licensure and take part in continuing education every two years to keep up with regulations that often change.

“One of the biggest changes in this industry was when (President Richard) Nixon signed the Clean Water Act in 1972,” Johnson said. “Since then, regulations on water quality have kept getting stricter.”

Water plant operators must stay on top of the regulations and, in turn, figure out how to implement them at their plants. At many modern plants, including the new one planned in Winchester, much of the work can be automated. At the old Water Works plant, however, many things still have to be done by hand.

“All the lime, carbon and materials like that are added by hand,” Johnson said, showcasing a number of large sacks stored at the plant. “At the new plant, those will be automated, which will save work for the employees.”

The automation will help give the employees more breathing room between the testing, monitoring, maintenance and other tasks they are required to complete each day, not to mention response when things go sour, which Johnson said does happen occasionally.

“If too much air gets into your intake pipe, then when you put in the chemicals for the flash mix they won’t mix right and you’ll get a layer of foam on top,” he said. “That ruins the whole process. You have to close off the water, drain the pools and clean them and fix anything that needs it. And then if you open the valve again and there’s still air in it, you have to do it all over again.”

Johnson and Flynn both said there have been close calls at the plant in the past, as workers race against the clock to solve issues before the city’s clean water supply runs out.

“This is an important job that nobody ever thinks about,” Johnson said. “People recognize how much police and fire departments do for the community because they’re visible, but they don’t think about their water until it’s not there.”

He said a shutdown of the plant, even on a temporary basis, could have major repercussions for the city and county, which is why WMU has to keep skilled workers available to deal with problems on site 24 hours a day seven days a week, with more help on call if needed.

“There have been a couple times we thought we might lose it,” Flynn said. “But we’ve always found a way to make it work.”

The work can also lead to long hours, especially when the human element of any job is factored in, such as people taking sick days or being late.

“In the past, I’ve been here for as long as 36 hours straight,” Johnson said. “It was rough, but you just have to do what you can.”

Improvements in efficiency and economic development

In addition to helping ease the burden on the workers currently operating the old plant, Flynn and Johnson said the new plant will make the job more efficient and increase the capacity of WMU to support more economic development.

“Routinely I get calls from Todd Denham, the industrial development coordinator, saying we’ve got an industry thinking about coming to town and we need to see if we can meet the needs of what they’re wanting to do,” Flynn said. “When you get to 85 percent of your capacity, the Division of Water says you need to be looking at upgrades to your system. When you get to that 90 to 95 percent range they’re almost mandating it. On our peak days, we’re already beyond that capacity on our rating.”

He said even when not factoring in possible industrial development, WMU needs to take a step forward just looking at the commercial and residential needs of the community five to 10 years down the road.

“Making those decisions now will actually help us to recruit that kind of growth down the road, to accommodate residential development which we’ve already seen an uptick in,” Flynn said. “If we can’t recruit commercial and industrial entities we won’t see any residential growth.”

With the last upgrade to the plant having been done more than 40 years ago, he said the time to act is now.

Flynn said WMU is formulating plans for what to do with the old plant once the new one is completed, but added a major goal is to preserve the historic building. He said some of the equipment will be taken out of the old plant. For now, the space is being considered as a storage facility for WMU’s files, which are fast outgrowing their current storage location in the utility’s office on North Main Street.

Johnson said a portion of the machines in the old plant will remain in place though, and the facility will also serve as a pump station when needed to transport water from the reservoir to the new plant for treatment.

Nearly a year after his arrest for leading police on a high speed pursuit, a suspect pleaded guilty Thursday in... read more