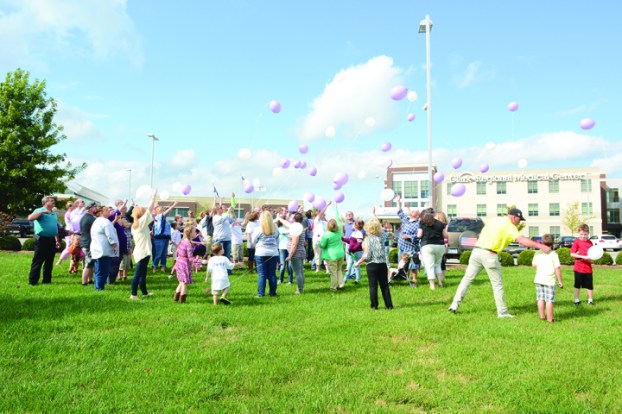 Heavy clouds and a threat of rain did not deter several families from gathering outside Clark Regional Medical Center Sunday afternoon for a Walk to Remember hosted by the hospital’s nurses.

The event, which hospital staff say is planned to be hosted annually, remembers babies lost to miscarriage, still birth, infant death or the loss of a child at any age.

“We hate to have to do something like this, but we feel it is important to all of you and to the community,” Bereavement Support leader Jan Cornett said to those in attendance. “In the 1980s President Ronald Reagan declared October Perinatal Loss Awareness Month because so many people lost their babies and it was taboo to speak about it. You should always be able to acknowledge the child. So today is a day of hope, hopefully of healing and of remembrance.”

The program included prayer, music from nurse Jennifer Webb, an interpretive dance by Audrey Conkwright and personal stories from Tammy Marcum and Cynthia Petersen, two mothers who both experienced the perinatal loss of a child.

Prior to the walk around the hospital parking lot, a list of the names of babies parents in attendance had lost was read aloud, and a blessing was given by Pastor Todd Rader of Ephesus Baptist Church.

As parents returned from the walk, they were given a purple carnation and a balloon. The balloons were then released at the conclusion of the program.