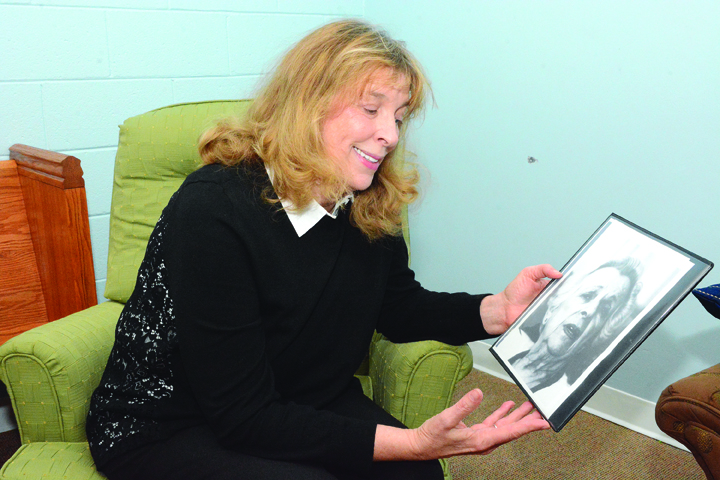 EKU professor Jacquelline Hamilton looks at a photo of Sylvia Green, a Holocaust survivor who built a life for herself in Winchester following the second world war. (Photo by Seth Littrell)

A Winchester resident and Eastern Kentucky University professor has resurrected a more than 12-year-old exhibit chronicling the lives of nine survivors of the Holocaust who moved to Kentucky following World War II.

In May 2005, friends Arwen Donahue and Rebecca Gayle Howell pieced together an exhibit of black and white photos and text panels from oral history interviews of nine holocaust survivors at the Lexington History Museum. The exhibit and the oral history interviews were later published in a book titled “This Is Home Now: Kentucky’s Holocaust Survivors Speak.”

The book gave a glimpse into the life of a few of the more than 140,000 Holocaust survivors who came to the United States following the war, which saw the murder of two thirds of the jews in Europe.

The book eventually made its way to EKU English and Theater professor Jacqueline Hamilton, who for the month of October has brought the exhibit to the Giles Gallery for people to see once again.

Hamilton said her interest in teaching the Holocaust began after she had a meeting with a high school teacher who suggested she take a weeklong course on teaching the subject.

“I then signed up for a course at the Olga Lengyl Institute in New York City,” Hamilton said. “While there, I found out the institute offers grants for education about the Holocaust.”

Hamilton contacted Donahue and Howell, who agreed to bring the exhibit out of storage for display at EKU if Hamilton could get the grant funding to pay for its display.

Among the survivors featured in the exhibit is Sylvia Green, a Winchester resident who, before her death in January, served as a prominent volunteer in Clark County.

According to Hamilton, Green survived Auschwitz and came to Kentucky after the war to live with her brother Bernard Farber, who had been able to leave Germany before the Holocaust began. Farber had settled in Lexington, and after reuniting with her brother, Sylvia met Jake Green, married him and moved to Winchester.

“She volunteered at Clark Regional Medical Center for many years,” Hamilton said.

She said Green never talked about her experience in the concentration camp with her children or others. They may have never known her story were it not for a history teacher at Tates Creek High School told his students in 1981 the Holocaust had never happened. This caused several survivors living in Kentucky — including Green — to speak up in a KET documentary about their experiences.

Another survivor, John Rosenberg, spoke at the second opening of the exhibit at Giles Gallery in the Campbell building on EKU’s campus.

The exhibit will remain open until Oct. 27, Hamilton said. She said she has spent much of her time over the past several weeks traveling the region to speak about the exhibit, sharing the story of the closest Holocaust survivor to each location where she speaks.

Hamilton said the exhibit is just as important now as it was when it first opened because it makes people think about the role they play in the world.

“People can basically be broken down into four groups,” she said. “There’s the perpetrators, the victims, the bystanders and the rescuers. Obviously nobody wants to be a perpetrator or a victim, but we have to teach people that it’s not good to be a bystander either. That’s probably the most important thing we’re trying to teach.”

The gallery is free to the public, and a public pay lot is located on EKU’s campus directly across from the Campbell Building offering easy access. Giles Gallery is open Monday, Wednesday and Friday from 11:30 a.m. to 4:30 p.m. and Tuesday and Thursday from 1:15 to 6:15 p.m.