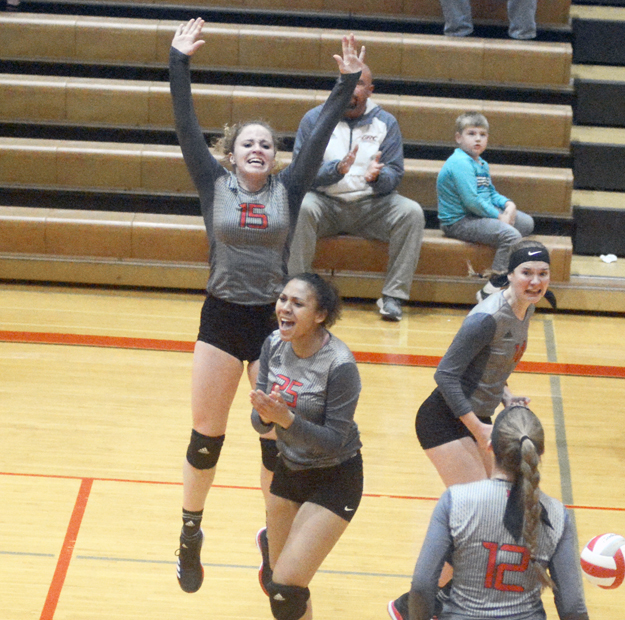 The two teams met earlier in the season on the same floor and went to five sets.

“I saw this ending as it started.,” Bryson said. “I did see this game going like it did at the beginning of the season. I said that in the locker room talk, ‘This is going to end like it started.’

“We’re working out some kinks and Moco was definitely good competition, they have some really good players out there and they really played the game well.”

The entire match was back-and-forth. The Cards took the first set, 25-23, and neither team led by more than three points.

The Indians answered with a strong performance, winning the second set, 25-18. GRC trailed 21-11 at one point and threatened later but couldn’t close the distance.

In the fourth set, the Indians started with a 7-1 lead. The Cardinals worked to a tie at 9, but Montgomery answered with five unanswered. GRC got as close as 14-13, but Montgomery was able to force a decisive fifth set.

That set looked much like the rest of the match. The biggest leads were both by GRC — at 6-4 and the clinching 16-14 score.

“These girls are phenomenal,” Bryson said. “They stepped up tonight and played their game. They gave it everything they had.”

“My captains Melanie Manns and Emma McQuade, with their work ethic, their attitude and personality, they’ve helped me out a lot as a first-year coach,” Brysaon said. “They’ve been great leaders.”