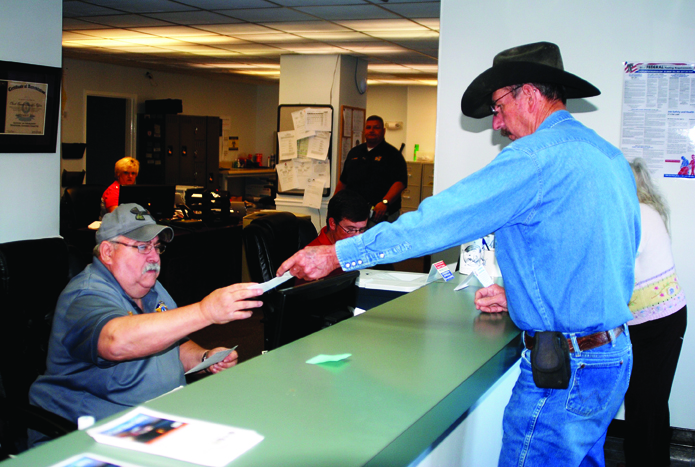 Inside was the annual tax bill, an item of many people’s scorn and grudging payment.

In a recent Clark County Fiscal Court meeting, one resident complained about the amount of his bill which goes to the school district and that students don’t have textbooks.

Taxes are a necessary evil in modern society, and woe to the elected officials who vote to raise taxes.

The revenue from the county tax bills provides a number of services from county government and the state. It helps fund the county school district and the county health department. It provides nearly all of the annual funding for the public library as well as much of it for the extension service.

This year, property owners will pay $981.26 for each $100,000 of value, according to information compiled by Clark County Judge-Executive Henry Branham. The cumulative tax rate actually decreased from last year, to the tune of $3.24 for each $100,000. Most districts kept the same rate from last year, though the library’s went down and the extension service’s rose slightly.

It’s not a welcome piece of mail, but it’s critical for the operation of local government and related entities.

The City of Winchester sets its tax rates, prepares its own tax bills and collects its revenue separately from the county. Nothing else is included on a city tax bill.

How much does everyone receive?

The school district has the largest tax rate by far, at 62.2 cents per $100 value. The extension service receives the least at 3.5 cents.

There are also taxes collected on tangible property (which includes machinery and inventory) which range from 4.38 cents per $100 for the extension service to 62.2 cents for the school district.

The task of preparing tax bills starts with Clark County Property Valuation Administrator Karen Bushart and her staff. According to state statute, the PVA must assess the value of all property within the county every four years. Bushart said the assessments of property value, which totaled $2.38 billion for 2017, are forwarded to the sheriff’s office,

The bills are mailed in September with the payment window opening Oct. 1. There is a 2 percent discount for bills paid during October, he said. Those paid in November and December are paid at face value.

Beginning in January, a 5 percent penalty is imposed, which increases to 10 percent in February, he said.

Turner said taxpayers can set up a payment contract with Thomas’ office at that point to pay on the bill and penalties.

Turner’s other part of the process is to set a date, usually in August, for a public sale of the remaining delinquent bills to registered third party vendors.

Why does the sheriff

Kentucky is one of three states, along with Louisiana and West Virginia, where the county sheriff is responsible for collecting county taxes.

“It was part of their duties to collect taxes for the king,” Perdue said. “It’s evolved through the years.”

Today, most sheriff’s departments in the U.S. are responsible for running the county’s jail in addition to providing court security and law enforcement. Kentucky law lists a sheriff’s duties as tax collection first and court security second.

Kentucky is one of two states where the sheriff does not run the jail, Perdue said.

“I’d much rather collect taxes than be responsible for jail operations,” he said.

Handling the county’s tax revenue brings its own challenges, including processing approximately $25 million, recording the transactions and distributing the funds to the county and its taxing districts. Perdue employs a full-time auditor and CPA as his office manager.

“It helps having an office manager with 25 years as an auditor and CPA,” he said.

Perdue said tax collection provides the bulk of his office’s $2 million budget for the calendar year. The sheriff’s office also receives a 2.25 percent commission from the school district and 4.25 percent from the other three districts for collecting their taxes, he said. In 2016, those commissions totaled about $792,000.

With the sheriff’s offices operating on a calendar year budget, collecting taxes in October creates issues.

Perdue said he is required to end the year with a zero balance. Kentucky has a program which allows sheriff’s offices to get an advance at no interest to finance the office until the property taxes come in again in October. It’s unwieldy, to say the least.

“Sheriffs are not allowed to carry over money to a new year,” he said. “I’d like to collect taxes year-round.”

Clark County Judge-Executive Henry Branham said he budgeted $1.922 million in the 2017-18 fiscal year budget for property tax revenue, out of the $2.33 million which was billed.

“We usually receive about 87 percent,” Branham said. “I hope we get more. We’ll get our first check by Nov. 10. That’s our biggest check.”

The tax revenue keeps the county operating and providing services to residents, he said.

In Clark County, there are only four, the school district, public library, extension service and health department, which suits Perdue just fine.

“A lot of other sheriffs have to collect for (multiple) financing districts,” he said. “A lot of eastern and western Kentucky counties have mine and mineral taxes, (and) oil taxes.”

Interim Clark County Health Director Leslie Aitken said Kentucky statute allows for health department or board of health to establish taxing districts. The funds must be used for maintenance and operations of the local health department, she said in an email, as well as initiatives to improve the health of the residents. The funds can also be used for capital improvements or construction.

For fiscal year 2017, the Clark County Health Department received 19 percent, or $1.25 million, of its nearly $7.5 million budget from property tax revenue. The bulk of the department’s revenue ($2.33 million) came from home health followed by $1.33 million from the clinic and $1.02 million from the HANDS program.

For the 2017 tax bills, $1.74 million will be billed for the health department

The Clark County Extension Service established its taxing district in 1998, which provides more than 90 percent of the service’s operating budget. Though the service is affiliated with the University of Kentucky, it only funds three agent positions, agents Heather Cassill and Jennifer Howard said.

“We’re in a memorandum with the university,” Cassill said. They’ll put an office in the county and work with the personnel. What UK funds is three agent positions and one staff member.”

“(The revenue) will fluctuate from year to year based on the assessments,” Howard said. “We’ve always taken the compensating rate.”

“We do serve the whole county and that’s what we’re here to do,” Howard said.

Like the extension service, local tax revenue funds nearly all of the Clark County  Public Library’s budget for the year.

“Some years its been 95 percent of what we run on,” CCPL Director Julie Maruskin said. “Public libraries appreciate the support of their communities more than you can imagine.”

Clark County established its library taxing district in 1974 and approved an increase in 1994 to build the current library, she said.

This year, $1.74 million will be billed for the library district.

Public schools make up the bulk of the county tax bill with the highest rate by far. The 2017 bills would generate more than $15.3 million for Clark County Public Schools, with 100 percent payment.

According to the district’s 2017 working budget, anticipated local tax revenue for the general fund is $14.74 million. Local funding, though, is only part of the picture. CCPS budgeted for $58.2 million in total revenue, including $26.2 million from the state including almost $18 million in SEEK funding.

The City of Winchester bills for its own property taxes, which go directly into the city’s general fund, Treasurer Debbie Bailey said.

The Winchester Board of Commissioners just approved its tax rates this week of 14.6 cents per $100 for real property and 14.99 cents for personal property. Bailey said the city’s tax bills will be prepared next week with a pay date of Dec. 1.

This year, the commissioners voted to keep the current rate, though it was higher than the compensating rate of 14.5 cents, which required a public hearing. This is at least the third year the city has kept the same rates, she said.

“We collect 97 to 98 percent of the money by the end of the fiscal year,” Bailey said. “It’s just for the general fund because the county collects for everyone else.”

By the end of the calendar year, the majority of the residents and businesses will have paid their taxes and the government will continue functioning.

The discussion of taxes will quiet until the late summer, when discussions of tax rates begin again.

BY THE NUMBERS: Local tax trends