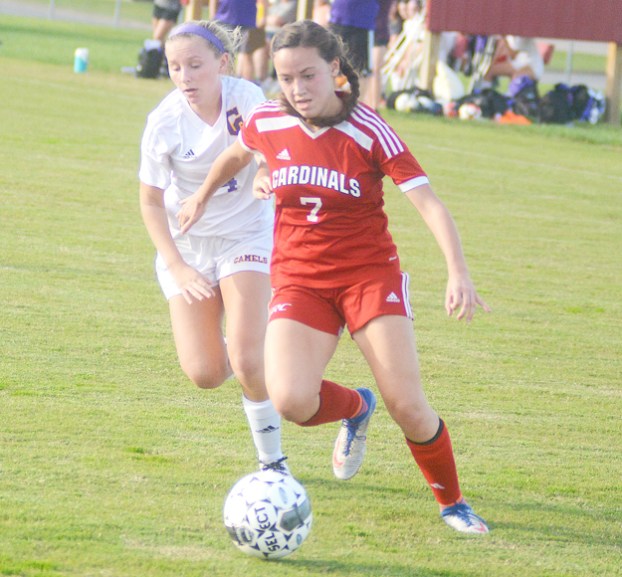 So just like they had all season, the Cardinals went to work, defeating Campbell County 2-0 in Winchester Saturday.

“Nothing is handed to you,” Abner said. “Everything has to be earned. I told the girls beforehand that effort would be the key and it was. We out-hustled them to balls. we out-worked them.”

The Cardinals and Camels battled through the first half hour, though GRC out-possessed Campbell and put more pressure on the Campbell defense. With 12 minutes left in the first half, GRC broke through. Haley Hannan served one into the box that Delaney Manning put over the keeper and into the net.

The second half was more of the same until the final 10 minutes when the Camels moved defenders up to supplement their attack. It seemed to pay off, as they got pressure on the GRC defense.

The Camels earned three straight corner kicks in a flurry of action in front of the GRC goal, but the Cardinals refused to bend.

“They really stepped it up on our side,” Martin said. “But we pulled together.”

“She had a game-winning save,” Abner said. “She stepped up when she needed to. I’ve said all year that goalies are supposed to stop goals. She stopped two right there toward the end. We struggled a bit against those corners, but we found a way. Laura was a big part of it, as were Meaghan (Curren) and Taylor (Kelly).”

The Cards got to take a breath when Julia Pohl intercepted a pass, and a bigger sigh of relief when her ensuing pass to Allie Bush led to a counter attack. Bush sped past the Camel defense and shot a goal past a diving keeper to put the Cardinals up 2-0 with 4:32 left to play.

“When she put that in, I ran up to basically midfield I was so excited,” Martin said.

“One thing you can’t teach is speed and she (Bush) has unbelievable speed,” Abner said. “She has worked so hard on her touches. Her touches stay where she wants them to. It’s why she can get past people, she has such control. She uses her body well to shield and she’s very strong over the ball. She isn’t a big girl, but she can play bigger than she really is.”

The Camels tried to answered immediately, putting a shot on frame just 30 seconds later but again Martin was there to smother it.

“Laura has been great all season,” GRC senior Shelby Benson said. “But in that moment, she showed how good she is.”

Other than a corner kick with 2:30 left, the Camels never really threatened again.

It was not only the second straight region title for the Cardinals, who improve to 18-3-1 on the season but also the second year in a row they have defeated the Camels on the way to the championship. GRC topped Campbell, 2-1, in a rainy semifinal at Harrison County last year.

“This year, they (Camels) were more aggressive and they played a lot harder,” Martin said. “That makes this win all the more exciting.”

And winning in Winchester instead of bringing the trophy home made this one a little sweeter.

“Last year was great, but this year is even better,” Benson said. “This game meant more because it was at home and our families and classmates could come and watch us. It was really special.”

And this team — which will be looking for the program’s first-ever state tournament victory this week — is special, Benson said.

“Our teamwork is on another level,” she said. “Our footwork, our connection, our relationship — it’s all better this year.”

Manning, Bush, Martin and Madeline Mann were named to the all-tournament team.

GRC will host the semi-state sectional game, which is set for Tuesday. The Cardinals will kick off at 7 p.m. against 12th Region and reigning state champion West Jessamine.

GRC and the Colts battled to a 1-1 tie in Nicholasville back on Sept. 21.

George Rogers Clark High School football coach Oliver Lucas would like to see his team stop shooting itself in the... read more