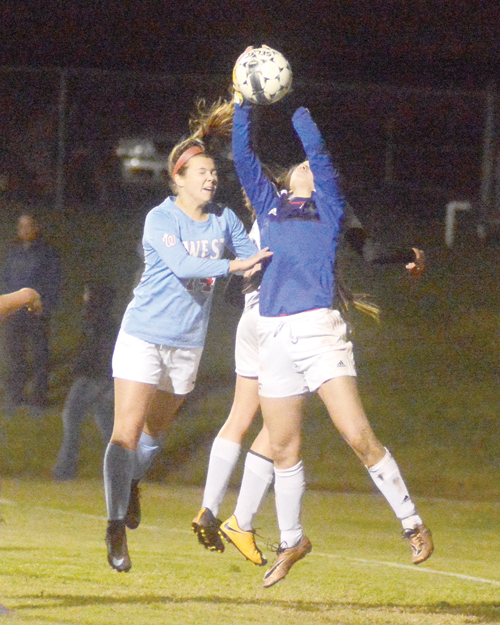 The Colts defeated the Cards in the first round of the state tournament.

“West Jessamine played a tremendous game,” GRC coach Matthew Abner said. “They played the best they could possibly play. They didn’t make a whole lot of mistakes. They were the better team tonight.”

GRC weathered most of the early pressure from West, showing why the Cardinals sport the best defense in the 10th Region.

But the Colts finally broke through with 13 minutes left in the first half, then again with a goal in the final 3 minutes of the half.

The Cardinals had more chances in the second half, but never found the back of the net. The Colts got an insurance goal on a deep shot with 15 minutes left to play.

Most of the night, West’s passes were crisper and the defending state champion Colts made few mistakes.

“Experience plays a big part,” Abner said. “That’s why we tried to schedule more tough games. But we still had a number of games that weren’t tough for us and we get a little stagnant.”

In the four playoff games the Cardinals played prior to Tuesday, GRC outscored its opponents 22-1.

“We haven’t had to play at a high level every game,” Abner said. “It took time for us to get up to the speed of play.”

Part of that tougher schedule included West Jessamine. The Cardinals took on the Colts Sept. 21 in Nicholasville, battling to a 1-1 draw.

“We’re clicking,” West coach Kevin Wright said. “We’re getting better every game. This was a total team effort. Spacing was good, Our touch was good. The communication was good.

“And that’s a good team (GRC). They’ve had a heckuva year. Hats off to their coach and their team. Matthew Abner does a good job with them.”

The Cardinals finish the season with an 18-4-1 record, reaching the state tournament for the second straight season.

Part of answering that riddle is having a year-round focus, Abner said.

“Players are learning it takes more than just your regular season,” he said. “We’ve got to work through the winter and spring to get to that higher level. That’s what other teams do.”

Nine Cardinals finished their careers on their home field — a senior class that’s enjoyed quite a bit of success.

By Mike Marsee Contributing Writer It might not have tasted very sweet in the moment, but George Rogers Clark’s appearance... read more