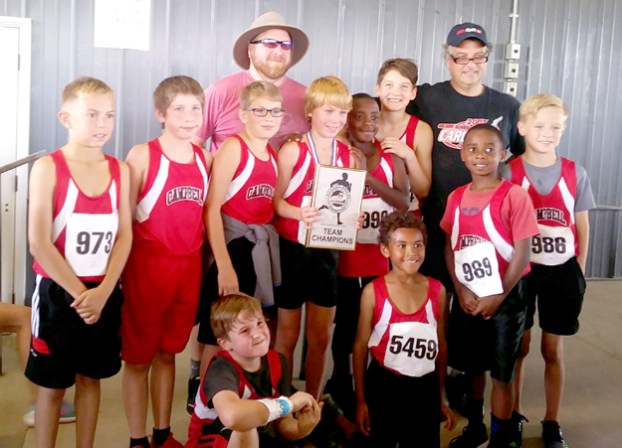 The Campbell Junior High sixth-grade and under cross country team had waited a year for this.

The Cardinals wanted a trophy and were willing to do whatever they had to.

“These kids were ninth at state last year, and the Top 5 teams get trophies,” coach Dodd Dixon said. “They really wanted to get a trophy and that doesn’t happen over night. They asked what it would take to get a trophy and I told them they would have to train harder.”

So they went to work.

“Some of them decided to run track over the spring,” Dixon said. “They worked hard. They talked about this for the last year.”

So when the time came for the Cardinals to get into the Top 5, they just went and ahead and won the state championship.

“They were focused,” Dixon said. “It’s amazing to see kids this young be so focused, but for a year, they had they’ve had their eye on this goal.”

The win caps a strong season for the Cardinals, who suffered just two defeats during the year. Short-handed, they lost to St. Joseph and they also fell to Goshen.

RDC was able to exact revenge in the state meet, not just defeating Goshen but ending Goshen’s state championship streak.

“It was pretty decisive,” Dixon said. “Goshen looked almost unbeatable, they are such a good team. Our kids were amazing.

“They just had this look of determination on thier face.”

“In last year’s meet, they ran the race, but this year they raced,” Dixon said. “They raced to the finish. Everyone one of these kids, when they crossed the finish, they would just collapse. They had nothing left to give.”

For the seventh- and eighth-grade team, Jack Loutens took seventh and Cody Cooper finished 19th. As a team, the Cardinals took 12th overall in that group.

“If you’re Top 10 at state, you’re pretty good,” Dixon said. “You’re going to make some noise at the high school level, and he’ll (Loutens) will run with the high school team at regionals this year.”

On the girls side, the Cardinals got strong performances from Campbell Taylor, Ella Mitmesser, Kennedy Partin, Alissa Parsley in the seventh- and eighth-grade division. In the sixth-grade group, Brooklyn Strange and Ana Wilson were RDC’s top performers.

The season ends for the Campbell cross country team, though some will continue to work and compete with the high school team as GRC’s season wraps up.

GRC hosts the regional meet this Saturday at 1 p.m.

Dixon is expecting a lot from his high school girls team which has been the top-ranked club in the region almost the entire season. The Cardinals were runner-up in last year’s region meet.