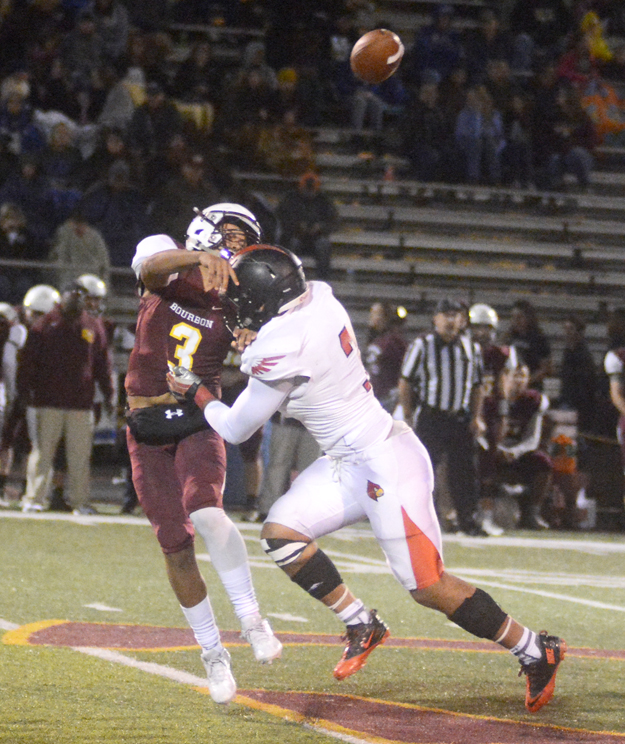 PARIS — The George Rogers Clark High School football team’s trip to Bourbon County Friday could not have gone any differently than the previous one.

The Cardinals turned the tables on the Colonels by turning a close game into a blowout in the second half, cruising to a 47-14 win.

“It’s about attitude,” GRC coach Olliver Lucas said. “The kids believed they could win and they believed in the system.”

Last season, the Cards sat for hours during a weather delay then watched the Colonels take control for a 25-9 win. This year, forecasted rain waited until the final whislte to fall, and it was the Cardinals who took control — scoring 33 unanswered points.

“We kept our momentum,” senior corner back Brooks Denham said. “We kept it through halftime and into the fourth quarter. That’s what did it.”

After forcing a thee-and-out to start the game, GRC used six and half minutes of the clock on a 68-yard scoring drive that was capped by 22-yard touchdown run from Nitavius Thomas — the start of a big night for the running back.

Thomas finished with more than 240 yards and four touchdowns.

Bourbon answered with a 65-yard touchdown pass, but didn’t convert the PAT, leaving GRC up 7-6.

The Cardinals added to their lead with another time-consuming drive — this one to end the first half. Thomas capped it with a 2-yard run with 15 seconds left in the second quarter. GRC enjoyed a 14-6 lead at halftime.

The Colonels stopped GRC to start the third quarter and scored on another big pass play, this one 46 yards. The two-point conversion made it 14-14.

The Colonels stopped GRC’s offense again, focring a punt, but that’s when the momentum swung wildly in the Cardinals’ favor.

Denham caught a deflected pass for his first interception of the night. After a five-minute drive, Thomas punched it in for a 21-14 lead.

After forcing Bourbon to punt, the Cardinals scored quickly with Thomas rushing for a 77-yard score and a 27-14 advantage.

The teams exchanged fumbles to start the fourth quarter. Jenkins recovered the Bourbon fumble on the Colonel 23.

A somewhat promising drive for Bourbon was cut short when Austin Blair recovered a fumble.

The ensuing drive was capped off by Nisbet’s second TD pass, this one to Nick Willoughby.

The final score came courtesy the GRC defense when Denham read a wide-receiver screen play and cut in between the Bourbon quarterback and his target. He raced 30 yards for the touchdown.

“I saw the one come out to block me, I just knew I had to bite on it,” Denham said.

“Brooks — I’m so proud of that kid. He had two picks tonight,” Lucas said. “We lost Trevon (Jones to an injury), but Brooks more than made up for that. So that was just a great effort.”

Other than a pair of big plays, the defense kept the Colonel offense quiet, particularly in the second half.

“The secondary played better as a whole than we did in previous weeks,” Denham said. “We gave up less big plays, that helped give us the ‘W’ in the end.”

“Outstanding effort tonight on both sides of the ball,” Lucas said. “I couldn’t be more proud of the kids.  The seniors have really led us to this point. Our defense was stellar tonight.”

The Colonels drop to 6-4 on the year.

GRC now prepares for the postseason. The Cardinals travel to Georgetown Friday to take on Scott County (8-2).