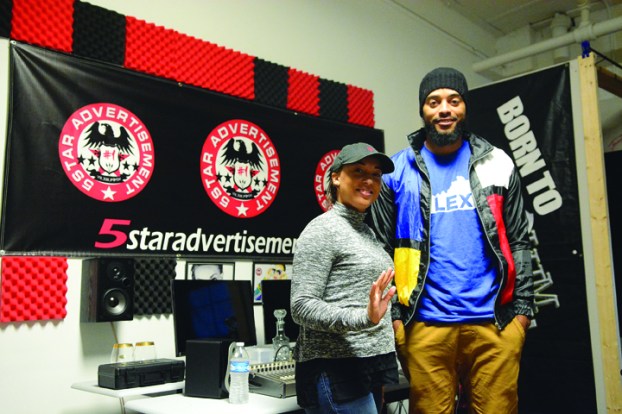 For Seneca Anderson and Jessica Marci, Winchester has always been home. The two grew up in Clark County and throughout the years they owned several local businesses, including a clothing shop called the Groovy Grab Bag, a thrift store and a nightclub called the Upper Room.

However, the two say their biggest passion has been to do advertising work and promote the community they love.

That’s why the two started 5Star Advertisement, a business to help build networks for Kentucky entertainers.

To help artists gain notoriety, 5Star uses a combination of video, photo and social media advertisement to kickstart networking for its clients. Anderson and Marci said they work with both musical performers and models from the bluegrass area.

5Star has also been active in organizing several public events in the downtown area, including the recent Country on Main concert Oct. 21 and the Glow Festival July 15 at Lykins Park.

Anderson said the motivation to host events comes from his discussions with young people who think they have to leave Winchester to find something to do.

“We need a spot where people can go for entertainment, and Main Street can be that spot,” Anderson said.

He said downtown Winchester is not just the center of the city, it acts as a central location for several different communities as well, including, Lexington, Richmond and Mount Sterling.

Marci said the events also serve to help boost the local economy and the mom and pop stores downtown.

“We want to support our local stores and our local restaurants,” she said. “We don’t want them to leave.”

Marci said the Glow Festival and Country on Main events will continue annually, and 5Star is looking for other events to either host or partner with an organization to host, including a potential comedy show in early 2018.

“We’ll work with anyone, as long as they’re positive and it’s good for the community,” Anderson said.

5Star Advertisement can be contacted through its website, 5Staradvertisement.com. The company can also be found on Facebook.