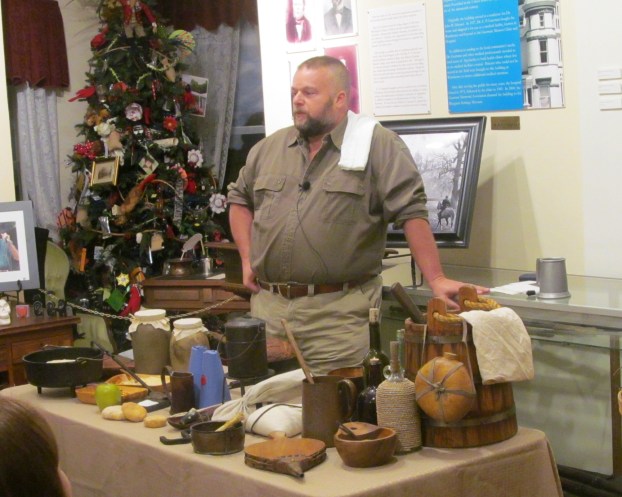 Pioneers were, by necessity, a strong and resourceful people, hard-working and determined to survive in a challenging environment. Nowhere was this more evident than in the constant struggle to provide food for their families.

Kevin Palmer, the Bluegrass Heritage Museum’s living historian (and Winchester’s chief of police), recently presented a program at the museum on pioneer foods.

He focused on how foods were obtained and handled from the period of the Revolutionary War to the Civil War, before the innovations of the Industrial Revolution took hold for most Americans.

Palmer recently published a book, “The Pioneer Guide: Eighteenth-Century Survival.” This is a fictional story whose purpose is “to flesh out a narrative of what it must have been like to pull up roots, leave everything behind and walk into the wilderness.” It is for sale in the museum gift shop for $10.

“On the frontier,” he said, “everybody in the home did everything.”

It wasn’t a case of the women just working inside the cabin and the men outside. For survival’s sake, everyone needed to have a working knowledge of such things as starting and keeping a fire going, how to grow, prepare and preserve foods, and so on.

One of the most important items on the pioneer’s “grocery list” was salt, crucial for preserving meat in those days before refrigeration.

It is so common today, but for Daniel Boone and his contemporaries, obtaining salt was a labor-intensive process. It had to be extracted from streams that ran over salt licks by boiling the water down and retrieving the salt left behind.

Either way, it involved a lot of work to collect firewood and man the kettles, while simultaneously guarding against Indian attacks and dealing with cold weather.

So, it’s no surprise pioneers valued salt highly and used it as sparingly as possible. It could cost a half a day’s wage to buy one pound of it.

Wheat flour, if they could get it, was also valuable and white bread was not commonly used for everyday eating. Breads made with yeast held moisture and would not last longer than a few days before spoiling, while hard bread without yeast could last for years.

Corn was “the rock star” of pioneer foods because it could be used for so many things. When parched (almost but not quite popped), it became a carry-around food. This was soft enough to eat, but it would last awhile.

Corn would also be ground into meal at grist mills and used for cornbread, mush, corn dodgers (a corn version of hard tack) and more.

To make bread, a fire would be lit in the oven until it was hot enough, then raked out.

The bread would then be baked before the oven cooled. Similarly, pioneers would not cook other foods directly over a fire, as it would get burned; instead, they would cook it over coals. How did they tell if it was hot enough for the job?

“Your hand over the heat was your thermostat,” Palmer explained. “Folks working inside the cabin were the best fire-makers.” They had to be able to get it going, maintain it, and gauge the temperature.

A Dutch oven was a heavy cast iron pot with a lid. It was such a valuable item that documents showed it would be willed to heirs. A 300-year-old Dutch oven was among the many items Palmer brought to show the audience.

Glazed pots were the 18th Century version of Tupperware. Eating and cooking utensils could be made from horns, leather, brass, copper and wood.

Glass bottles had different shapes for different jobs. Sometimes they were covered in cord to protect them, and the family had to plan carefully how they would use their bottles throughout the year.

Game was plentiful and was an important source of meat.

“What’s the difference between a critter and a beast?” Palmer asked. “A beast thinks you’re a critter!”

Fresh meat was probably eaten a little rare, because if it were cooked through, it was very tough.

Domestic animals were also quite valuable, both for work and food. A horse, pig or cow could cost a month or two of wages, or its worth in trade.

There was very little waste. For example, even cows’ feet would be used. People would boil them long enough to get some jelly-like material off them; with a little sugar and lemon zest added, the result would be lemon jelly.

Rice, wheat flour, sugar loaves and spices could sometimes be obtained in trade, but they were expensive. Foods were often bland, as money would probably be needed for other things. Herbs could be harvested for some seasoning.

As a special treat for the audience, Palmer brought stew to share. Unlike pioneer fare, this was seasoned deliciously and was much appreciated by those in attendance.

He explained that this was “cowboy” stew rather than “hunter’s” stew.

The only hunting involved for this occurred in the aisles of Kroger.

Rosemary Campbell is director of publications at the Bluegrass Heritage Museum.

If a certificate were ever given out for the dumbest piece of legislation, one that was recently proposed for the... read more