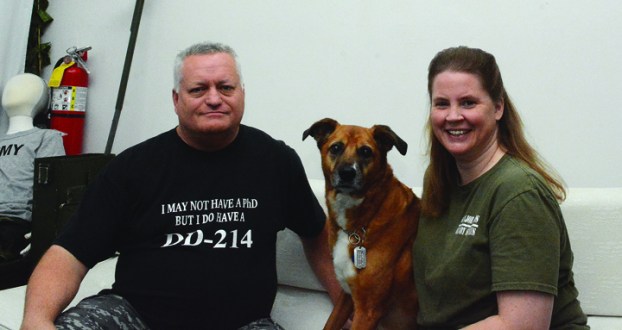 Greg and Denisse Yates are celebrating the fifth anniversary of Major Dad's army surplus store's physical store. Major Dad's began as an online store, but over time the physical store became known as a place where veterans can go to talk with other veterans. (Photo by Seth Littrell)

A place for veterans

After losing his job during the 2008 recession, Greg Yates and his wife Denise decided they would try their hands at running their own business. A chance encounter in 2009 at Peddlers Mall resulted in them taking over a military surplus store.

“It’s a weird story, but we had a booth at the Peddlers Mall,” Greg said. “I would walk in with my retired Army cap and the lady there said, ‘You know, there’s a gentleman here who has Army surplus and he’s been thinking about getting out of the business.’ We met him, and I tell people this and they still don’t believe this, but on a handshake we bought his business.”

From 2009 to 2012 the two ran the business through booths at several Peddlers Mall locations.

“At one time, we had 12 Peddlers Malls all over the place,” Greg said. “We were running ourselves ragged going to them, and me working other jobs.”

On Dec. 1, 2012, Greg and Denise finally opened their first brick and mortar location, and Major Dads was born. Greg, a retired U.S. Army officer who left the service after 24 years as a major, said the idea for the name came to him one night when thinking about an old TV show named Major Dad.

Major Dads started on Main Street downtown, but then moved twice, finally settling in next to Woody’s, Rural King and Planet Fitness.

Greg said most of the store’s initial stock came from the man he bought the store from, but over the years, the majority of what the shop sells has come from trading with veterans in the area.

Some items the store has taken in have too much historic or sentimental value to be resold, so Greg and Denise began creating museum-like displays in the store as well. Some items on display include a Marine dress uniform, a U.S. Army uniform from a Korean War veteran and helmets dating back to World War I and World War II.

“We have a mine detector,” Greg said. “That one was weird. The guy who turned it in works for WMU and he found it in the garbage.”

As the store started doing more business with veterans, it earned a new reputation.

“There are several stores in the area that do this same sort of thing, but we’re the only one that’s veteran owned and operated.”

Major Dads gives a 10 percent discount to all veterans, and the fact that it is staffed by a veteran and a military spouse has made it well known in some circles as a place where veterans can come to talk to someone who understands what they have been through.

“We’ve had a Desert Storm, Vietnam and Iraqi Freedom veteran in here talking at once,” Greg said. “You wouldn’t think there was much they had in common, but the one commonality between them all was that they had served. I’m a Cold War veteran. I never went to combat, but it doesn’t matter.”

Denise said some veterans just come in to talk with someone.

“A lot of them will come in here and reminisce, but some of them, especially later in their life, it’s coming back to haunt them,” Denise said. “I’ve had some young ones come in here, and sometimes they’ll open up just a little bit. If they do that, it’s a major accomplishment because they do not talk. It’s more a healing thing.”

Greg and Denise said they never envisioned their store as a gathering place for veterans when they first opened their doors, but it has become a point of pride for the business since. The two keep maps on the walls marked with thumb tacks showing how far some people have come to visit the store.

“It’s about a 100-mile radius,” Greg said. “We have someone who comes from Michigan once or twice a year when they come down to visit family, one from Maryland, Ohio, West Virginia, North Carolina, Georgia… I think part of it is being veteran-owned and another part is just that there’s less and less stores like this.”

Over the years the inventory of Major Dads has changed more to add gifts for veterans that are often requested by their families.

“We have a lot who come in here to get medals for uniforms for someone who’s getting ready to pass away or to build a shadowbox,” Denise said.

The store also offers custom hand-stamped dog tags, which are popular among older veterans who have lost their original set as well as younger people, like students in George Rogers Clark High School’s JROTC program.

Greg said in the future he would like to be able to host veterans at the store to sit and have coffee in the morning or stop in throughout the day. He said the store has a section up front with a table, chairs and a couch to accommodate visitors, and if a group of veterans wanted to meet earlier in the day, he would open the store early for them.

More than four dozen children will take the stage Friday as “The Lion King Jr.” opens for a two weekend... read more