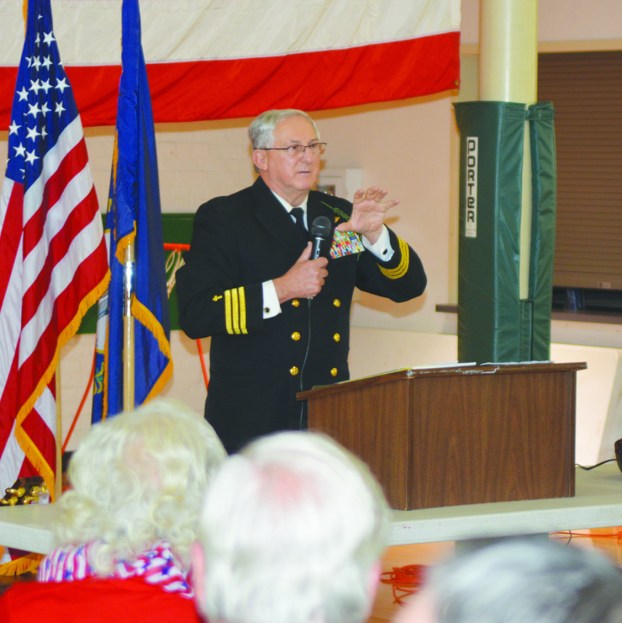 Retired Navy chaplain Father Ben Brown tells of combat from a chaplain's point of view during the community Veterans Day program at College Park Gym Saturday. Brown served four tours overseas as a chaplain after joining when he was 43. (Photo by Fred Petke)

Almost three decades ago, Father Benedict Brown was looking for a second career. He found it as a Navy chaplain.

The seventh-generation Kentuckian spent four tours, two on land and two on sea, with the Navy, Marine Corps and Coast Guard in the Middle East and Asia.

“I’m old enough to be a Vietnam veteran but I served with people a whole lot younger than I am now,” Brown said during Winchester’s community Veterans Day program Saturday at College Park Gymnasium.

“The role of the chaplain … in combat is the same as at home,” he said. “What we’d do at home, we’d do in a different context.”

During one tour in 2005, Brown said a convoy hit an IED. Three soldiers were killed, but two survived. Brown went to the medical aid station to check on the survivors as well as the medical teams and injured civilians.

“I never forget the doctor saying, ‘Chaplain, make sure you see those corpsmen. They saved these guys’ lives,” Brown said.

Then the soldiers’ platoon commander, a Marine lieutenant, entered in a rage.

“He says, ‘What are you doing treating these people? They’re the ones that killed my guys,” said Brown who was a commander at that point. “I grabbed him by the shoulder and said, “Lieutenant, come with me and that is an order. I told him we have to go take care of the other guys.”

But there was more.

“Sometimes our role got a little blurred,” he said.

Sometimes that meant manning the radio when the convoy he was riding in was stopped for a suspected IED (improvised explosive device). Sometimes it meant qualifying in weapon training, though chaplains do not participate in combat. Sometimes it’s intervening in situations before they escalate further.

Mainly, he said it was looking after young people, most younger than 30, in brutal situations and be the person to support and encourage them.