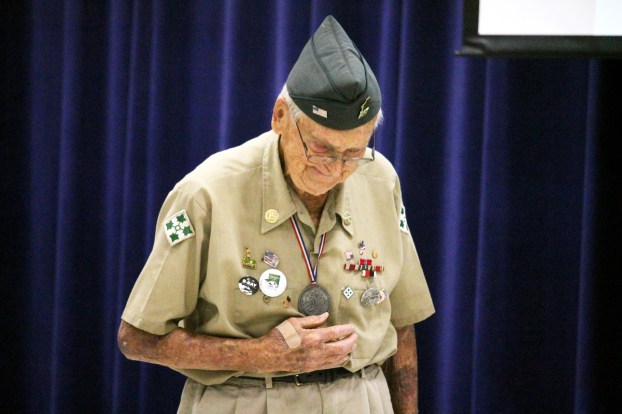 As Clark County’s Distinguished Young Woman Caroline Handshoe sang the National Anthem before the student body of Strode Station Elementary School Friday, it was nearly impossible to ignore what was happening just behind her.

Just beyond her soaring notes of “Whose broad stripes and bright stars, Through the perilous fight,” was Charles Wilson. Wilson stood astonishingly tall and steady for his 92 years. As he sang along, it was as though he was taken to another place.

Perhaps that place was more than 70 years ago, when Wilson was a teenager growing up on a farm in Carlisle, Kentucky.

“I was 18 years old when I was drafted in the U.S. Army,” Wilson told the group kindergarten through fourth grade students. “That meant I had no choice but to go because my country needed me. So, I left high school and the farm where I was reared for the Army.”

Wilson said although he learned how to drive a tank, fight with a weapon and even memorized his serial number while at basic training in Fort Sill, Oklahoma, he was unsure of himself.

“I was just 18 years old and I didn’t know I would be a good soldier,” he recalled.

Maybe that place Wilson was transported to wasn’t his family farm, but rather a beach more than 4,000 miles away where Wilson would determine his worth as a soldier.

Wilson was assigned to the 4th Infantry Division in Europe in June 1944. Days later he would fight in one of the most notable battles of WWII.

In the early morning hours of June 6, 1944, Wilson drove the first tank off his ship onto Utah Beach in Normandy on what would become known as D-Day.

“We fought the German army and our mission was to bring freedom back to France,” Wilson said. “And we did that.”

Less than three months later, Wilson would celebrate his 19th birthday as the French celebrated their liberation from Germany.

“On Aug. 25 we were in Paris,” he recalled. “It was my 19th birthday and I drove a tank into Paris City and people were celebrating the liberation in the streets.”

Wilson said a French family fed him and his tank mates in the streets of Paris to thank them.

And Wilson fought in places like Belgium and Luxberg pushing the Germans further and further back their country, he said.

He was injured during the war — a broken back left him paralyzed for some time and in pain still to this day. But Wilson acknowledges it could have been worse.

Wilson returned to Kentucky after the war and became a teacher and eventually a principal. He retired in 1979.

He is 92 now, and the last living member of his tank crew and recalls the privilege it was to revisit the site of the infamous battle 70 years later.

In 2014, Wilson made the trip back to Utah Beach with a group of students from George Rogers Clark High School under the leadership of French teacher Lydia Kohler.

“It was important for me to get to pay my respects for the many who (died there),” Wilson said. “Both the Americans and the Germans. Like me, many of them had to fight because of the law in their country.”

The French government funded Wilson’s trip so he could share his experiences with the grandchildren of the French citizens he liberated all those years ago. Wilson spoke to school children about the war, although he hadn’t discussed his experience for many years.

For Wilson, much of telling his story is to express the need to show respect to veterans, a message fitting for the occasion at Strode Station Elementary.

“All veterans deserve our respect and admiration,” he said. “Not just me.”

He encouraged students to ask their parents about the veterans in their family.

“Tell them, ‘thank you,” he said. “Veterans put their lives in harm’s way to give us a safe country where you can be anything you want to be and work hard to get there.”

Wilson said his audience at Strode Station was the largest he has shared his story with.

As the students applauded his story, Wilson paused, consumed by emotion, and it was evident he wasn’t being transported to any other time. He was taking in that moment where the sacrifices he made as a teenage boy would still be remembered and honored more than 70 years later.