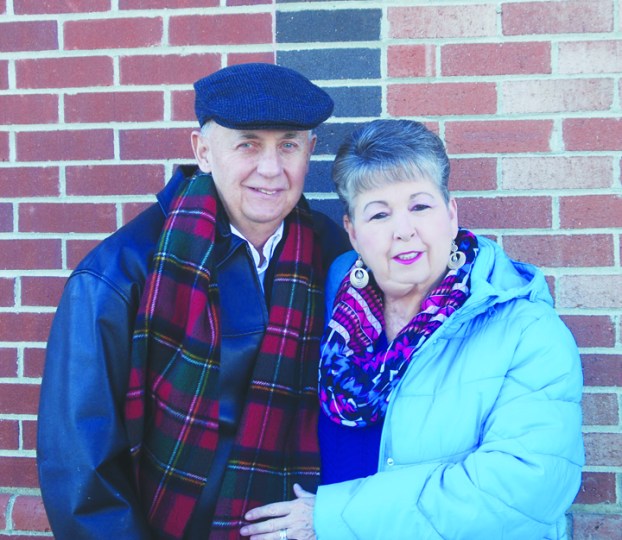 Steve and Darla Hamilton have volunteered for several years as bell ringers for the Salvation Army in Winchester. (Photo by Fred Petke)

This weekend, Salvation Army volunteers across the country will resume their holiday posts with their red kettles and ringing bells, seeking donations to help people in need.

For Winchester residents Steve and Darla Hamilton, ringing the bells has become more than just a way to volunteer and help others. It’s become a family tradition.

“We try to dress the part in red and look Christmas-y,” Darla said. “We pass out candy canes to everyone and I sing.”

The Hamiltons enjoy it so much, they keep signing up every year, though they don’t know how long they have actually volunteered.

“We call Shannon (Cox) every year and tell him to put us down for a couple spots,” Steve said. “We’re scheduled for two different dates.”

They are supposed to begin Friday, and then again the following week.

“We’re set for Black Friday,” he said. “That’ll be a big day. We try to do it during the time its busy.”

Often, they will bring some of their grandchildren along with them for their two-hour slot. Darla said they are starting to understand more as they get older, and some will be singing “Go Tell It On The Mountain” with her this year.

“We just feel like its a good thing to do and it gets people in the spirit of Christmas,” she said. “I think we get more out of it than they do. It’s a joy to look forward to it every year as part of our Christmas tradition. It’s so neat because you can see the people’s faces.”

One of the variables from year to year is the weather. Sometimes it can downright frigid and even snow.

It’s one of the things you can plan for, Steve said.

“Some days it gets pretty cold,” he said. “Some days you put on the Carhartts and get the hot chocolate. It’s not too bad if you dress for it.”

The best part, Darla said, is seeing other people give and be in the spirit of the holiday.

“It’s always interesting when people start approaching you with a child,” she said. “They’ll give the money to the child to put in. It sets a good example.”

“You know you’re collecting money that will benefit those in need,” Steve said. “Most people will smile and give joyfully.”

A charity auction at 6 p.m. tonight at Bargains on Broadway will raise money and toys for the Clark County... read more