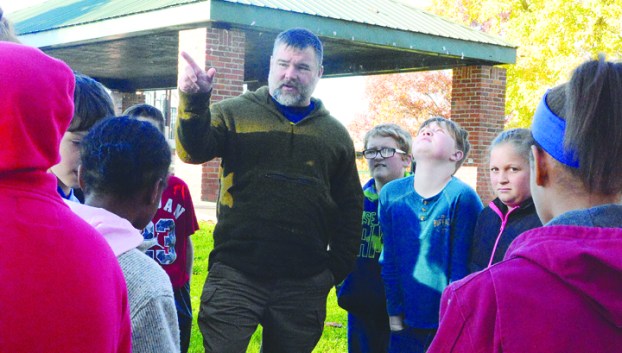 More than a dozen Baker Intermediate students huddled around a stump at College Park last Thursday, trying to guess how long the roots of a once large tree had been in place there. After throwing out a wide range of guesses, from 30 to 70 years, the group looked with anticipation to Craig Caudill, their instructor for the day, to give them the answer.

Craig, along with his wife Jennifer Caudill, have been working with the students for several weeks to help give them an introduction to nature. The two are the owners and operators of Nature Reliance School, which teaches a variety of outdoor skills, from land navigation and fire starting to bushcrafting and survival strategies.

In addition to letting the students know the stump was about 50 years old, the Caudills have been teaching them basic skills to help familiarize them with the outdoors as part of a STEM program offered through the Rowland Arts Center’s Mentors and Meals after school program, in partnership with Clark County Community Education.

“(Jennifer) has a background in education, and she’s been able to find ways to connect them with nature,” Craig said. “These aren’t kids who really do sports, they don’t really spend a lot of time outside.”

Some of the classes taught by Jennifer have been as simple as working with sticks and string, while others have involved learning to use a compass for navigation. According to RAC Director Joseph Miller, the majority of the classes have taken place at the RAC in the Cairn Coffee House. However, Thursday’s adventure to College Park was one of two field days in the program.

“We went to College Park for the first trip because it was an area familiar to the kids,” Craig said. “It was outdoors, but it wasn’t like bringing them out to the woods.”

During the trip to the park, the students learned about identifying trees and working together to solve challenges. They also learned about situational awareness, being mindful of where they are, what’s going on around them and if there are any dangers or hazards nearby.

For the second field day, the students will be taken on a recreational trip into the woods for an afternoon.

Jennifer and Craig said they have worked with several schools in Kentucky doing similar programs. The goal is twofold, giving students practical knowledge, how to act when outdoors to maximize their safety, while at the same time instilling a sense of teamwork in them.

Craig referenced one activity the students did during the field day, navigating blindfolded through a maze of ropes wrapped around trees.

“They went through that maze by themselves, but as they traveled they communicated with each other when one of them found a knot or there was an obstacle to get around,” he said. “Everything has a team building aspect to it.”

Craig said he and Jennifer will be working with the students up to their Christmas break.