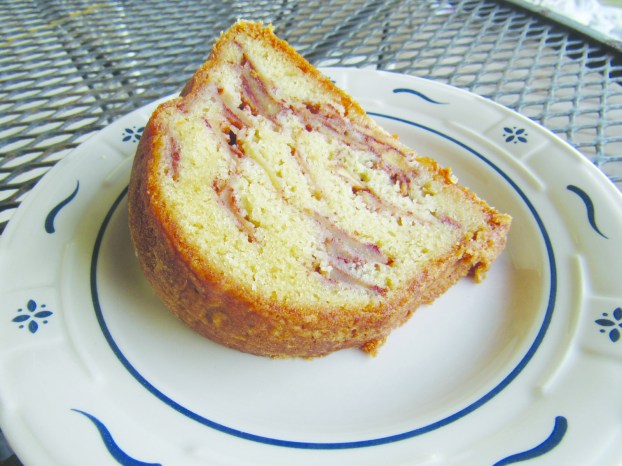 When I’m at the grocery I sometimes check the sale bin to see if there are any bargains I might want or need.

One particular morning when I was buzzing through the store to get items for our supper that evening, I noticed apples in the bargain bin.

We were supposed to have a neighborhood potluck cookout that weekend and I thought apple pie would be a perfect dish to take and share. I’d never heard of SweeTango apples and asked one of the produce department men if the apples were a sweet or tart apple.

He said they are a great apple to eat so I figured they weren’t tart enough for a pie. Before I could walk away, he offered to look them up on the internet just to be sure. He found that the apples are a mix of sweet and tart. I took a chance and bought more than enough for a pie (hey, maybe I’d make two pies for the potluck).

That evening, Brad asked what all the apples were for. When I told him my plans, he said “Oh, the cookout got cancelled because Mark (the neighbor who was going to host the get-together) has to work.”

Though I was disappointed we weren’t going to “party” with our neighbors, I didn’t let the mound of apples get me down. I dug around in my dessert folder for apple recipes. When I found today’s recipe, I figured it would be a good way to use a lot of the apples.

Today’s recipe came from an old Relish publication that used to be part of the weekend newspaper. It didn’t have a date on it but the paper had yellowed so I know I’ve had it a while.

The article that accompanied the recipe said that Philadelphia-Style Apple Cake or Jewish Apple Cake is a large, moist and hearty coffee cake laced with cinnamon and layered with sliced apples. The cake is an American variation on a traditional Eastern European recipe for what was in those days a very fancy cake served to visitors on the holidays. It’s often served at gatherings during the Rosh Hashanah, the Jewish New Year, when eating sweet foods is believed to ensure a sweet year.

Almost all of the recipes for this type cake use vegetable oil instead of butter, and orange juice in place of milk, to meet kosher laws that dairy cannot be eaten at the same meal as meat.

The author also said that the cake was better the second day and that it freezes well.

Saturday afternoon, I decided to bake this cake. After peeling, coring and slicing enough apples to make six cups (my apples were not large), I sprinkled the cinnamon and five tablespoons of sugar over the apples and then greased and floured my Bundt pan.

I read the recipe again and it said to grease, sugar and flour the pan. I’ve never heard of sugaring and flouring the pan. Since I’d already greased and floured it, I just threw in some sugar and shook it around then dumped out what hadn’t stuck.

I poured half of the remaining batter into the pan and layered the remaining apples, being careful not to get a lot of the juice from the apples mixed in (I was lazy and didn’t pour the liquid off, I just shook it off the apples as I picked them up).

I poured the remaining batter on top of the apples and spread it around to cover the apples the best I could.

I put the pan in the oven and set the time for 55 minutes. When the timer went off, I tested the cake and realized it needed to cook a bit longer.

I set the time for 10 more minutes and it still was not quite done. After five more minutes, the cake tester  came out clean.

I let the cake cool in the pan and then crossed my toes when I dumped it out of the pan (my hands were busy so I couldn’t cross my fingers).

Sometimes when I use my Bundt pan, things stick. This cake came out perfectly.

The cake looked and smelled good. After a couple of hours, it wasn’t completely cool, but I had to have a slice. One bite and I knew this recipe was headed to my self-made cookbook.

I offered Brad a piece but he declined, though he did have a couple of bites of mine. He liked this cake too, especially since it wasn’t overly sweet. The cake reminded me of a coffee cake.

To avoid eating the whole thing, I sliced several pieces for our neighbors, Brad’s co-workers and then took the rest to work to share.

This cake got rave reviews from my co-workers, and from Brad’s too. Before I could submit this article for publication, I made it a second time for a church breakfast get together, which means I definitely nailed it.

Combine flour, baking powder and salt in a bowl and set aside.

Bake 55-60 minutes, until the top turns golden brown and a knife inserted near the center comes out clean. Let cool 10 minutes in pan. Turn out onto a wire rack and let cool completely.

By Jennifer Howard The holidays seem to be a time for food, food and more food. Eating is a healthy... read more