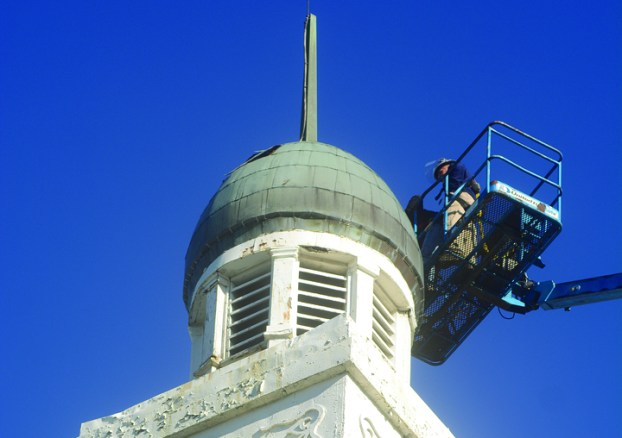 Saturday’s thunderstorm that blew through Clark County damaged the tarps covering the roof where the tower was removed, but did little significant damage to the courthouse.

Workers have been working on the courthouse roof  since the bell and clock tower was removed a couple weeks ago because of structural issues.

Clark County Judge-Executive Henry Branham said he was told one of the tarps was flapping Friday evening. By Saturday, the tarp was shredded, he said.

Branham said he called the contractors, who arrived late Saturday afternoon and fashioned several tarps inside to collect any water. A pair of sump pumps, then removed the water, he said.

“I checked on it Saturday night, Sunday morning and Sunday night,” Branham said. “Everything was dry and it was dry again (Monday).”

The tower had been leaking for a long time and allowing water to get into the top of the courthouse. The wood inside the tower was also rotten in several places.

Until the new tower is ready in the spring, workers will install a temporary roof to last through the winter.

It looks like very little of the existing tower will be able to be salvaged and reused, he said. During Wednesday’s Clark County Fiscal Court meeting, there will be a discussion about declaring the tower as surplus property and what to do with it, he said.

“We did get some good timbers with the bell that might be reused,” Branham said. “Most if it will be scrapped.”

The bell itself, he said, is in excellent condition but no decision has been made about what to do with it.

The project is expected to cost around $772,000 and will be financed by a bond issue.

A man wanted in Clark County on child abuse charged was arrested during the weekend by officials in Montgomery County.... read more