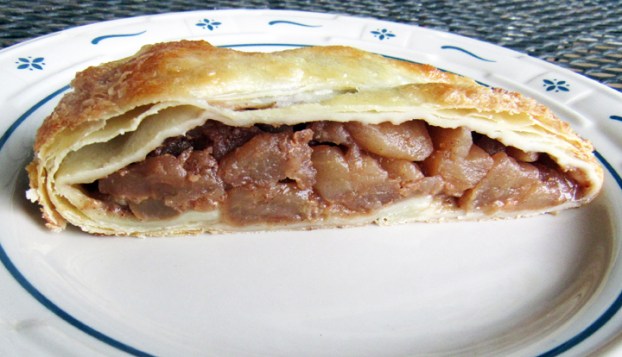 I found today’s recipe in the September/October 2013 issue of Taste of Home magazine.

As you know, I love desserts and anything apple always catches my eye.

I decided to make this strudel Thursday night, because I wanted something sweet and I had five apples in the refrigerator that needed to be used.

After supper I peeled and chopped the apples, put them in a pan with the apple cider, sugar and spices. The apples came to a boil and then simmered for about 20 minutes. I turned the stove off and removed the pan from the burner to let the apple mixture cool.

After an hour, the mixture hadn’t cooled and I figured out I wasn’t going to have apple strudel for dessert that night. So I just put the pan in the refrigerator and resigned myself to finishing up the next day.

Friday, while supper was in the oven, I removed the apples from the refrigerator and rolled out a puff pastry sheet on parchment paper. I preheated the oven and began scooping the apples from the pan with a slotted spoon, trying to drain as much of the liquid as I could. There was so much apple filling I was afraid I read the recipe wrong and I should have placed the apples on the puff pastry long ways instead of at the short end.

By the time I had all the apples on the puff pastry, the liquid I hadn’t drained off earlier seeped away from the apples and I used paper towels to soak some of it up. Feeling I had sopped up as much extra liquid as I could, I poured the caramel topping on and began rolling up the puff pastry the best I knew how.

Rolling up the softened pastry that was full of liquidy apples was harder than I thought it would be, and I ended up having to fold the pastry over the apples and, using the parchment paper, rolled the strudel the rest of the way up. I tucked the ends under and pinched the pastry together a little bit.

I made the egg wash, brushed some onto the top of the puff pastry and cut some slits in the top.

I didn’t have coarse sugar so I just sprinkled some granulated sugar over the top of the strudel — I didn’t measure.

I put the strudel in the oven and set the timer. When 20 minutes had passed, I checked on the strudel. It had just begun to brown, so I let it cook about another 10 minutes.

When it came out of the oven, it smelled so good. I noticed more of the liquid had cooked out of the apples. I didn’t want the crust to get soggy, so again I pulled out the paper towels and sopped up what I could.

Brad decided to have a very small piece of the strudel while I cut myself an average-sized piece. I added some vanilla ice cream to mine, but Brad said no to that much sugar.

This strudel was so yummy. Even though I thought the liquid would make the bottom of the crust soggy, it didn’t. We did not share this dessert with co-workers or neighbors. I just basically ate the whole thing over the weekend. The strudel was good hot and cold and it reheated just fine.

I nailed this recipe and it will be added to my self-made cookbook.

However, next time I will drain the apples better and will think about placing the apples along the long side of the rolled out pastry, just to see how it turns out.

Unfold puff pastry on a large sheet of parchment paper; roll into a 16×12-inch rectangle.

Place a short side of the rectangle facing you. Using a slotted spoon, arrange apples on bottom half of pastry to within 1 inch of edges.

Drizzle apples with caramel topping. Roll up jelly-roll style, starting with the bottom side. Pinch seams to seal and tuck ends under.

In a small bowl, whisk egg with water; brush over pastry. Sprinkle with coarse sugar. Cut slits in top. Bake 25-30 minutes or until golden brown.

If desired, serve with whipped cream and additional caramel topping.

The traditional holiday turkey will be prepared by about 250 million households this year. To make that dinner safer for... read more