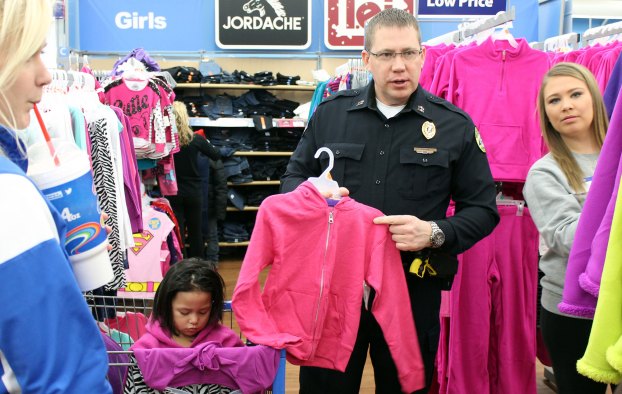 Winchester Police Capt. Shannon Stone helps a Shop with a Cop participant pick out clothing at Walmart during a previous year’s event. This year’s Shop with a Cop is set for Sunday, Dec. 16. (Sun file photo)

FOP ready for 25th ‘Shop With A Cop’ day

For the last 24 years, hundreds of Clark County children had a better Christmas thanks to local law enforcement officers and a small army of volunteers.

For a quarter-century, Winchester-Clark County Fraternal Order of Police Lodge 34 has raised money to take local children shopping for Christmas in its Shop with a Cop program.

This year won’t be any different, lodge President Lee Murray said, with a little more than two weeks before the event.

Perdue said Shop with a Cop peaked at about 350 children some years. Murray said recent participation has been around 200 children annually.

Murray expects about 220 children will be selected this year, and each will have $125 to spend.

“We get them to buy clothes they need first, then they can buy a toy or two,” he said.

During the event’s history, Murray said more than 4,000 children have participated and more than $500,000 has been spent for local children’s Christmases.

“It’s awesome,” Murray said. “It’s very rewarding. Some of these kids, if it wasn’t for us, they wouldn’t have a Christmas this year.”

This year’s event will be at 7 a.m. Sunday, Dec. 17, at Walmart in Winchester. Anyone wishing to volunteer and help children shop can show up at the store that morning.

Participating children will be selected by the family resource centers in the schools, Murray said, and lodge members do not accept children’s names.

Winchester residents and businesses are gearing up for the first Friday after the week of Thanksgiving to host a very... read more