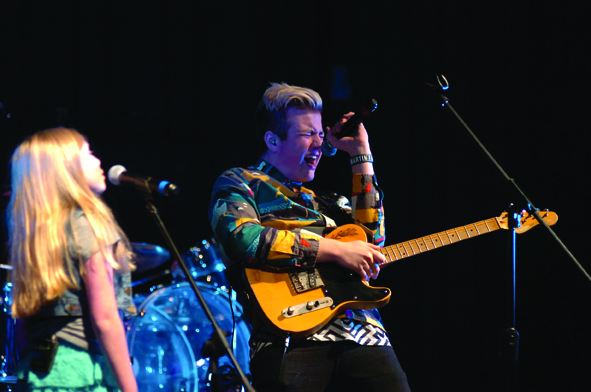 For Paul Martin, this weekend will be a bit of a homecoming. Martin and his family, collectively known as the musical group the Martin Family Circus, will be performing tonight at Leeds Center for the Arts and acting as the grand marshal for Saturday’s Christmas Parade.

Martin, a Clark County native who has spent his life in the music industry who was part of the band Exile in the 1990s, said the idea grew out of a show the family played in Winchester last year at Robert D. Campbell Junior High School.

“We did a new CD last fall and wanted to come by and play,” Martin said, “That same day the Leeds folks asked us to come by and do a couple songs there.”

The family enjoyed playing at Leeds so much they made plans to come back this year and do a more extensive show. Martin said tonight’s show will feature the family’s most popular songs but will end with a selection of Christmas songs to leave audience in the holiday spirit.

The show begins at 7:30 p.m., and tickets can be purchased at leedscenter.org.

Martin added that this will be his second time acting as grand marshal for the parade, and he and the rest of the family are eagerly looking forward to it.

“I was asked to be grand marshal in 1994 and did it with (wife) Jaime when we were engaged,” Martin said. “We always wanted to have kids, and it will be great to come back more than 20 years later and do it again with the whole family.”

The parade will begin at 6 p.m. Saturday and will work its way down Main Street.

The Christmas season officially arrives this weekend, with Santa Claus riding on the back of a fire truck. Santa’s grand... read more