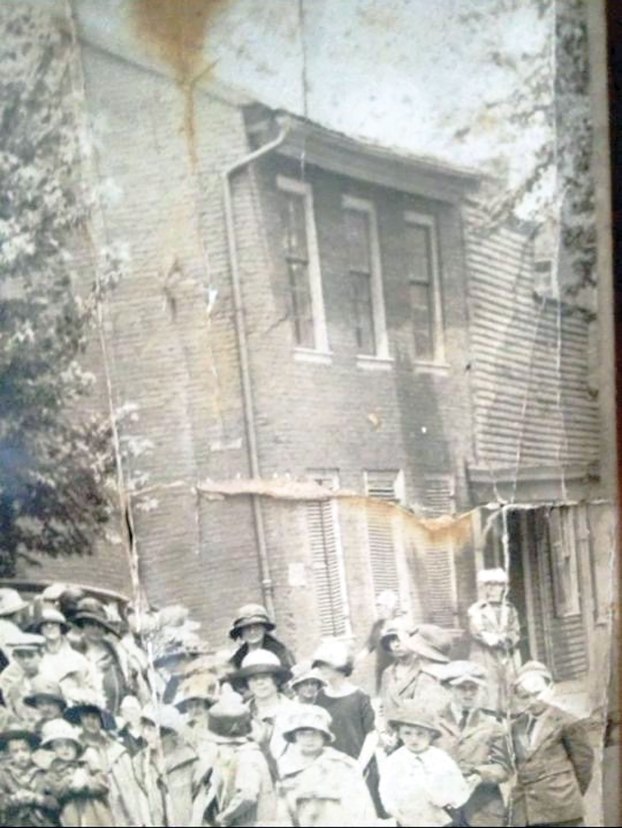 Robert Griffing may have built the brick house on the corner of Main and Hickman streets, 1813-1818. The frame house attached is referred to in deeds as the “old Fitch place.” The photograph is part of a larger panoramic view of the Methodist Church circa 1920s. (Courtesy of Bobbi Newell.)

House at the corner of Hickman and Main 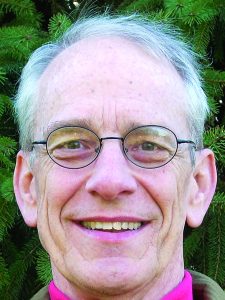 Several weeks ago in a column about the Lampton family, I stated that James Lampton owned a house that once stood on the northwest corner of Main and Hickman streets.

After the article appeared, Bobbi Newell sent me a photograph showing the actual house. Having this fascinating old picture in hand made me wonder who erected the building and when, and who the subsequent owners were?

Much of Winchester’s early development took place on an extension of Main Street referred to as “the southern vicinity of the town,” which at that time meant south of Ogden Court.

Speculators purchased parcels of land and sold them off in pieces. The buyers in turn further subdivided the land before reselling and so on.

In 1812, Taylor sold Jesse W. Garner one-half an acre off the south end of his tract. That same year, Garner divided his tract and sold William Vaughn a one-eighth-acre lot that fronted 26 feet on Main and ran back along Hickman (not then opened) 210 feet to the alley.

Up to this point, deeds refer to Garner’s and Vaughn’s land as “lots” with no houses. The lot Griffing purchased in 1813 for $140 fronted 26 feet on Main and 110 feet on Hickman (still not opened).

When he sold the lot to Dr. John Mills in 1818 for $2,000, the conveyance included a house. Thus, we infer that Griffing built the house shown in the photograph sometime between 1813 and 1818. Thereafter, the house would change hands numerous times.

In 1838, Kohlhass sold the house to Valentine Lingenfelter, a tanner, and his wife Mary “for one dollar and love and affection for daughter Mary, wife of Valentine.” The deed states Valentine and Mary were then living in the house.

At that time, the Rev. William Matthews was living in the house, which became the church parsonage.

In 1871, church trustees sold the house to Jonathan Trowbridge for $3,000. When Trowbridge died in 1890, he was remembered as a highly-esteemed merchant and “one of the oldest and best known citizens of this city.” His will conveyed “to my nieces, Sarah and Belle Nelson who live with me, the house and lot of ground where I live on the corner of Main and Hickman Streets.”

Belle, unmarried, lived with her parents in Illinois. She died of “la grippe” in 1899. In 1900, Samuel N. Ballard and wife, “formerly Sarah Nelson,” sold the house to Sarah H. Scobee.

Sarah, the widow of Robert Scobee, was living at Sewell Shop when she died in 1901 at the age of 82. Her obituary stated that “she fell and broke a thigh bone, and owing to her extreme age, the accident proved fatal…. She bought a residence in this city and had made arrangements to come here to live.”

Sarah’s will left the house in Winchester to her stepchildren, who sold it to Mrs. Allie H. T. Vaught “for a valuable consideration.”

Alice “Allie” Hubbard Taylor Vaught was the wife of Dr. John C. Vaught and a daughter of Hubbard B. Taylor. They lived half a block north in the “Coulter House,” which I wrote about June 3, 2016.

Presumably, the houses shown in the photograph were razed soon after. A Texaco station stood on the site for many years.

A year later, Bonfield sold the property — where John and Roy Myers leased and operated a service station — to Winchester Bank for $110,000. The site presently serves as a parking lot for Community Trust Bank. However, the corner where the houses stood is now a shady little park with several benches.

Alert readers will have noticed the chain of title for the house that stood at the corner of Main and Hickman never mentions James Lampton. In a previous article, I examined the myth that Jane Lampton, mother of Mark Twain, was born in Winchester.

A.C. Quisenberry had claimed Jane was the daughter of James Lampton and that she was born “in a brick house on the corner of Main and Hickman streets … known as the old Trowbridge place.”

We now know James was not the father of Jane Lampton (it was Benjamin), and we must doubt whether James ever lived at the corner of Main and Hickman.

When Jane was born in 1803, the house had not been built and would not be for at least a decade.

If James Lampton ever resided in the house or kept a tavern there, he certainly did not own it.

James Lampton at one time owned the west end of William Vaughn’s lot. Lampton acquired the tract bordering 26 feet on Wall Alley and 100 feet on Hickman. James sold the tract to his brother Joshua in 1818. The property was described in the deed as having a brick house formerly owned by James and a brick livery stable built by Joshua. Perhaps this was the source of the confusion.

The Local History Room at the Clark County Public Library contains “many a quaint and curious volume of forgotten lore.”... read more