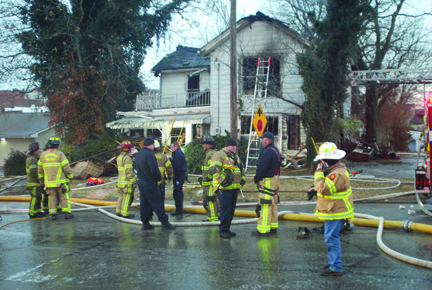 Winchester and Clark County firefighters stand outside 18 N. Highland St. Friday morning, the scene of their second structure fire in eight hours. Winchester Fire-EMS Chief Cathy Rigney said no one was living in the house, which received significant damage from the fire. (Photo by Fred Petke)

Winchester and Clark County firefighters battled freezing temperatures throughout Thursday night and Friday morning as they battled a pair of major fires.

Firefighters were essentially out all night beginning around 6:30 p.m. Thursday when a fire was reported at Contech, a metal galvanizing company  at 700 Tech Drive in the Winchester Industrial Park.

Rigney said an employee was working on a piece of machinery inside the facility. When the machine was restarted, it made a loud noise and sparked the fire, she said.

The flames spread quickly from the machine, up the wall and into the roof, which eventually caused a partial roof collapse. The machine also carried a large amount of hydraulic fluid, which is flammable, she said.

Fire officials were back on the scene Friday morning. The building showed exterior damage including gaps between some of the metal panels as well as a large hole in the roof from the fire.

A message left with the company’s public relations officer was not returned by press time.

No injuries were reported, and all employees at the facility got out without incident, Rigney said. One firefighters was treated at the scene for possible exposure, she said.

Firefighters cleared the Contech scene after about four hours.

At 3:36 a.m. Friday, they were called back out for a house fire at 18 N. Highland St. The house has been burning for some time before it was spotted and reported by a passerby, she said.

“It had been burning long enough (the fire) was in the walls and went to the attic,” she said.

Between open walls, an old structure and a lot of furniture inside the house, firefighters spent hours digging through to find the fire, she said.

“They had to literally drag everything out, hit a hot spot, flow more water and keep digging,” she said. Outside most windows and doors were piles of furniture and other items, including a wheelchair, that firefighters removed while chasing the fire.

The fire burned through the roof at the rear  and caused major damage throughout.

The cause and point of origin for the fire remain under investigation, she said.

Frigid temperatures and back to back fires with little rest made for a long night for firefighters, she said. Aside from one firefighters who was treated and released from Clark Regional Medical Center for a bruised foot, things went as well as could be expected, she said.