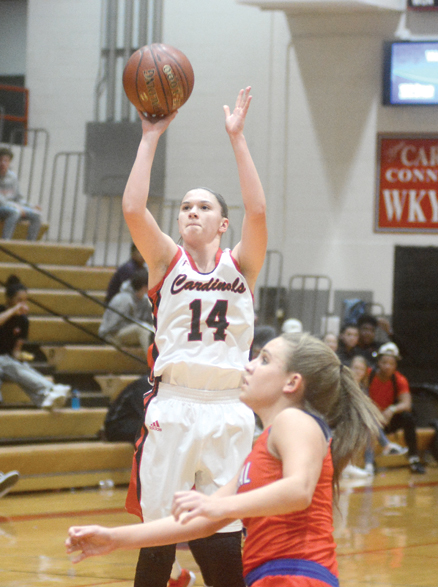 It was the first full-game action for the sophomore who had been dealing with an injury through the first couple weeks of the season.

“Getting everyone healthy will help us,” GRC coach Robbie Graham said. “Everyone can slide back over where we have been working.”

The Cardinals looked comfortable early, leading 16-9 after the first quarter and outscoring the Indians 27-7 in the second quarter. GRC turned defense into offense, scoring 28 points off 26 turnovers.

“We’re much better offensively when we are aggressive on defensve,” Graham said. “When we can disrupt the passing lanes and creating scoring opportunities.”

Igo was one of three Cardinals in double figures, joined by Maleaha Bell, who had 12 points, and Shemaya Behanan, who put in 10.

Both Hayley Harrison and Shelbi Wilson finished with eight points. Malaysia Hill pitched in with five.

The Cardinals out-rebounded the Indians, 35-22, winning on the offensive boards by a 21-7 margin. Behanan had a team-high six boards.

Despite the lopsided win, Graham saw some areas for improvement, notably at the free-throw ling.

“We gave them way too many free throws,” he said. “We relied on the outside shot too much. We have some good shooters but we want to attack the basket and put the pressure on the defense.”

The win improves GRC to 3-2 on the year while Central falls to 1-4.

The Cardinals travel to Nicholasville Thursday to take on East Jessamine. They return home to play the first game of a double-header Friday against Paris. The girls’ game tips at 6 p.m. and the boys’ game follows.