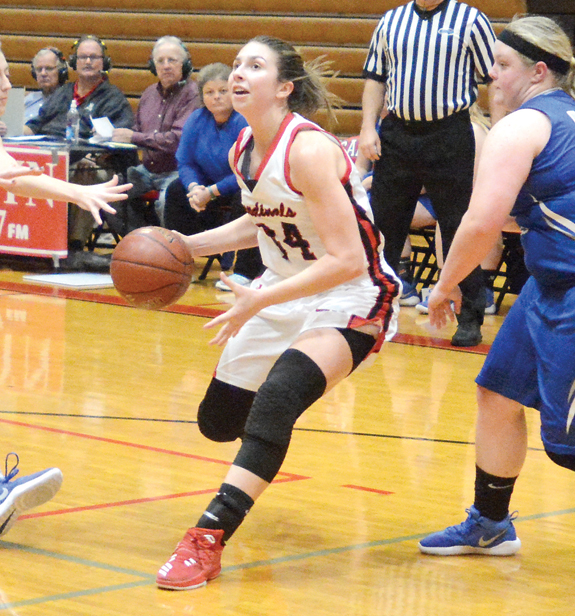 The George Rogers Clark High School girls basketball team got a clutch 3-pointer from Hayley Harrison Friday to give the Cardinals the late lead in a 51-50 win over Mercy in the Traditional Bank Holiday Classic at Lexington Catholic.

The game was tight throughout with seven lead change and eight ties.

Maleaha Bell rebounded a missed Mercy free throw with less than 10 seconds remaining. Kennedy Igo drove the length of the court and dish to Harrison, who stepped between two Mercy defenders and sank a 3-pointer as the buzzer sounded.

The Cardinals turned the ball over 25 times but won the rebounding battle, 36-28.

Shemaya Behanan had a game-high 16 points to lead the Cardinals. She also pulled down nine rebounds.

Harrison finished with 14 points and four steals. Jasmine Flowers had nine and Igo put in seven.

Bell had eight rebounds to go with her three points.

Mercy got 14 points from both Taziah Jenks and Regan Berger each. Hope Sivori added 11 points.

The win is the fifth straight on the year and second in the Holiday Classic for the Cardinals, who advance to semifinal where they will take on Murray.

Murray (8-1) was a state tournament semifinalist last season and haven’t since dropping the season-opener on Dec. 2.

GRC and Murray are set to tip off at 10 a.m. If the Cardinals win, they advance to the championship game, which is scheduled for 6:30 p.m. today.

A third-place game is scheduled for 4:30 p.m. today should the Cardinals lose.