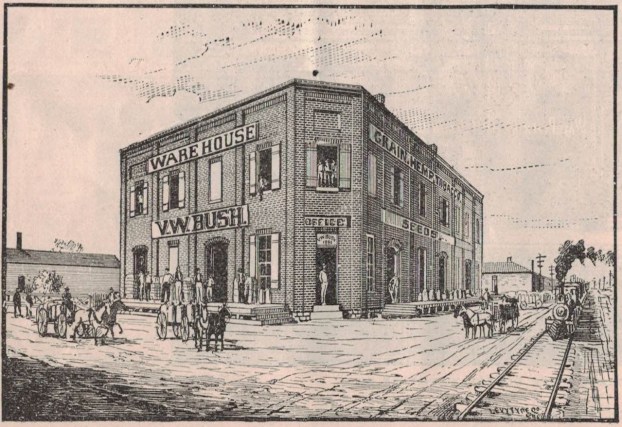 V. W. Bush Warehouse as pictured in the Handbook of Clark County and the City of Winchester, 1889.

History of the V.W. Bush Warehouse

This is the first installment in a series of articles on the V. W. Bush Warehouse. This 2-story brick structure stands at the intersection of Main Street and Depot Street in Winchester.

Known locally as the “Sphar Building,” it has always been referred to in county deed books as the V. W. Bush Warehouse. This landmark building — the city’s first railway warehouse — is Clark County’s most recent addition to the National Register for Historic Places (March 2017). 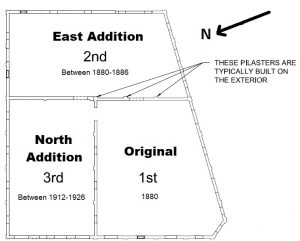 The warehouse was built in phases, as shown in this diagram.

Valentine White Bush erected his warehouse in 1880 adjacent to the tracks of the Elizabethtown, Lexington & Big Sandy Railroad, the rail line that launched a building boom in Winchester. The structure stands about 300 feet from the site of the depot shared by the EL&BS and Kentucky Central Railroads.

The warehouse was designed to store hemp, wheat and other grains for local sale and shipment by rail and to provide a market for the county’s agricultural products.

The 27,000 square foot building has two stories and a full basement.

The original building had wooden platforms on the south (Depot Street) and west (Main Street) sides. At some point, the platforms were replaced with concrete sidewalks, now mostly absent. A defunct set of scales adjoins a remnant of sidewalk on the south side.

The original structure was modified by two additions. The present trapezoidal-shaped building has a rear or east addition constructed sometime between 1880 and 1886 and a north addition built between 1912 and 1926.

Except for the office and two adjoining rooms, the building has an open floor plan. One freight elevator remains of the three that were present in 1926. A front stairwell provides access to the second floor, a rear stairwell goes to the basement.

Four grain silos were installed at the rear of the building by Sphar & Co. sometime in the 1930s or ‘40s. These structures were added during the heyday of the bluegrass seed industry and could hold raw or cleaned seed. The silos allowed the warehouse to handle bulk quantities of grass seed without having to receive and ship it in bags. Highly sophisticated grain-cleaning equipment was mounted inside the building, much of it still in place.

Many of the window openings still have their iron-clad wooden shutters, which probably helped reduce the risk of fire.

The building has a number of decorative architectural elements on the exterior. These include brick pilasters, arched doorways, and a brick parapet surrounding the roof. The parapet has a dentillated cornice and a recessed rectangular brick feature in each bay. The brickwork features a modified Flemish bond pattern. 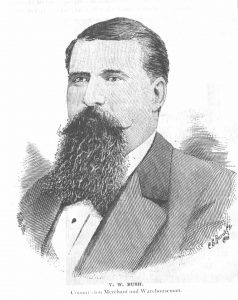 After Sphar Feed & Seed Company closed in 2005, the warehouse stood empty. Unused portions of the building had been deteriorating for many years due to lack of maintenance, and the warehouse was in danger of being razed due to code violations.

The warehouse is now poised to return to service.

Recognizing the historic value of the building and its importance in revitalizing the North Winchester area, the City of Winchester and Clark County Fiscal Court stepped forward to rescue this landmark. The City acquired title to the property in April 2016.

Funding — nearly $2 million — has been secured for rehabilitation.

GRW, the architect and engineering firm for the project, has completed construction drawings, specifications and cost estimates. Bid documents are currently under review by state agencies in Frankfort.

Construction should begin in the spring of 2018 and, optimistically, could be completed by the end of the year.

Plans call for rehabilitating the warehouse and repurposing it to serve as Winchester’s welcome center and professional office space for local agencies including Tourism, Industrial Development Authority, Chamber of Commerce and Main Street Winchester.