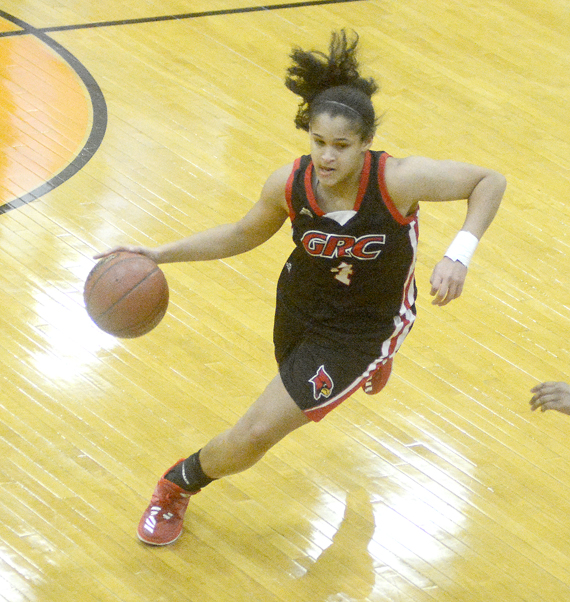 The George Rogers Clark High School girls basketball team got the New Year started off right with a blowout district win on the road Wednesday night in Paris.

The Cardinals started fast and were never threatened in a 69-42 win that saw them start with an 11-0 run.

While Paris (11-5) never got closer than eight points the rest of the way, the Cardinals (10-5) may have taken their foot off the gas, GRC coach Robbie Graham said.

“We came out on fire then we got a little flat after we got the lead,” he said. “We got comfortable. We picked up a little more effort toward the end of the game.”

Kennedy Igo led the way with a game-high 18 points. She hit four 3-pointers, including three in the third quarter.

“She’s a good player,” Graham said. “She’s tough to handle inside, but I was glad to see us come out with the fire early.”

Facing a large deficit, the Greyhounds went to a full-court press midway through the game, but after some initial success the Cardinals were able to solve it.

“We’ve been working hard on that,” Graham said. “Over the break, it gave us some problems. We worked hard on our press offense and our halfcourt traps, working on moving the ball and looking to attack. So, hopefully, we can score buckets and get people out of their traps and presses.”

GRC shared the ball well, tallying 23 assists on 27 field goals. The Greyhounds won the battle of the boards, 36-27, but the Cards made up for it by forcing 39 turnovers.

The Cardinals had spent the holiday break playing Top 20 teams around the state in a pair of holiday tournaments, then returned home to take on a pair of district opponents.

After defeating Paris Wednesday, the Cardinals are 2-0 in 40th District play. The Cardinals face Bourbon Friday as part of another doubleheader. GRC girls play at 6 p.m. in Winchester with the boys set to tip around 7:30.

That gives the girls a short turnaround before facing the Colonels, who have become GRC’s rivals over the past few seasons.

Bourbon is coming off a 60-46 loss at home to Harrison County before the New Year. The Colonels are eld by Kennedy Kelly’s 14.3 points a game.

“We’ll have a light practice tomorrow then we’ll come back and get Bourbon,” Graham said. “It’s a home game, girl-boy doubleheader. There will be a lot of energy, hopefully we’re ready to go.”