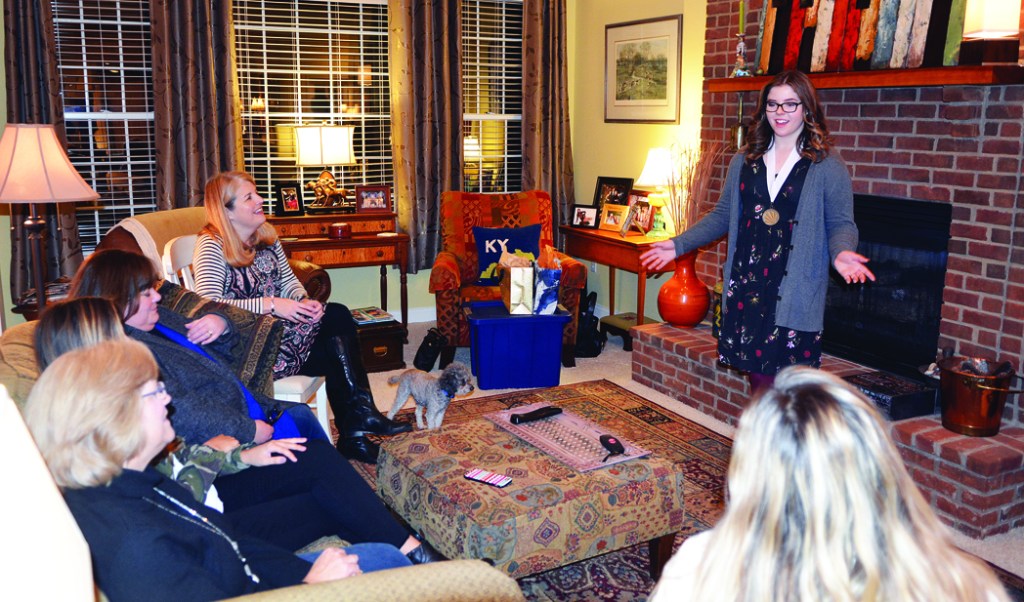 Clark County’s Distinguished Young Woman, 17-year-old Caroline Handshoe said she is nervous but ready for vie for the title of Kentucky’s DYW.

She will leave Sunday and spend the next week preparing for the program, along with other county DYWs from around the state, and will vie for the state title Jan. 12-13 at the Singletary Center for the Arts.

The daughter of Ron and Amy Handshoe, Caroline is a senior at George Rogers Clark High School, and competed against six other Clark County girls for the local title in June, where she also won preliminary self-expression and talent awards.

Wednesday night, Caroline celebrated the upcoming week with a farewell party where she also conducted a mock interview and practiced her talent, a vocal performance of “Piece of Sky.” Originally by Barbara Streisand, Caroline will perform a rendition adapted for the Miss America Pageant.

While in Lexington preparing for the competition, Caroline will stay with hosts Tressa and “Birdie” Milburn of Lexington, along with Adair County’s DYW, Lauren Williams.

She will spend the days leading up to Friday’s opening round of competition perfecting her choreography, fitness routine and will get one shot at practicing her talent with sound and music before performing Friday night. Contestants will also participate in various philanthropic outings throughout the week.

Caroline will compete in fitness and self-expression Saturday afternoon Jan. 13. Finals will be Saturday. Caroline’s “little sister” Janeway Loather will help her throughout the contest and perform with her as well. Janeway is the daughter of Katherine Lowther, who is one of Caroline’s teachers at GRC.

One representative will advance to the national program in Mobile, Alabama, where they give away $150,000 in cash tuition scholarships.

Caroline said she has mixed emotions about the upcoming week.

Caroline said she is most nervous about her talent, because anything can happen when singing.

“You never know, I just worry about my voice cracking or something,” she said.

And while she’s equally nervous about the interview portion of the contest, she also said that is where she feels most confident.

“I did OK in interview in the local contest,” she said. “But I also just want to be sure I don’t fumble over my words or start talking too fast. At the same time, I’m confident going into it.”

DYW Committee Chairwoman Donna Duller said she and the other committee members are excited to cheer Caroline on.

“I am always amazed at all the talented young ladies that will participate,” Fuller said. “Caroline will be no exception. She has worked very hard on her vocal selection. Regardless of the outcome, we will be very proud of Caroline as she exemplifies the true meaning of the DYW program by making a commitment to be her best self in areas such as academics, physical fitness, morality, character and social and civic participation. We can’t wait to see her shine on stage .

Caroline said it’s an honor to represent Clark County at the program.

“This has been a great six months as DYW so far,” she said. “I’ve been working really hard at school, going to college interviews and preparing for my ACT. At the same time, it was been great to get to know the wonderful people in the local program. I’m excited to get to represent the community and the other girls who competed in the local program this summer.”

Caroline said she hopes she can someday encourage other young girls to participate int he program.

“This year we only had seven girl compete,” she said. “It was a great group of girls, but I would love to see more girls compete in the future. I was nervous going into it and I think a lot of people didn’t do it because they were nervous or they had other commitments, and that’s sad because this has been one of the best experiences of my life so far.”