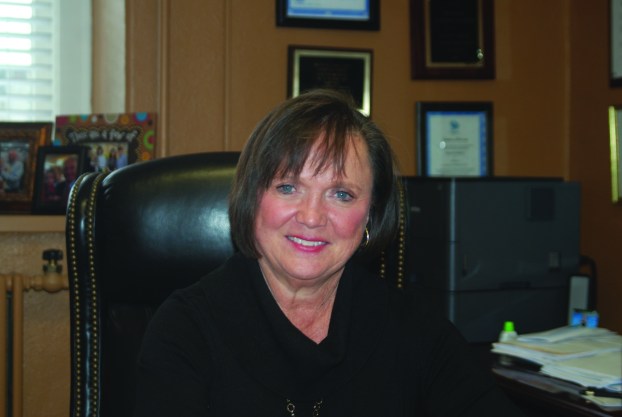 Karen Bushart is nearing her 26th anniversary at Clark County PVA, but she will retire at the end of this term citing concerns about the state pension crisis. (Photo by Fred Petke)

Bushart to retire as PVA

Clark County Property Valuation Administrator Karen Bushart has decided not to run for another term in office, partly because of the looming state pension crisis.

Bushart was first appointed to the position in August 1992 and has been elected six more times to the office, which assesses property values as the base for Clark County’s property taxes.

“If I make to November, I will have been here 26 years,” Bushart said. “My main concern was the pension crisis.”

Even though the situation has not been resolved, Bushart said she believed it was prudent to retire now, rather than possibly win another term and leave partway through.

For much of her time as PVA, Bushart said she advocated for additional state funding while working with other PVAs in surviving numerous budget cuts.

“… It made it difficult to keep fighting the fight,” she said.

With her time working in the industrial development office, Bushart said she is qualified to retire and decided the time was right to step aside at the end of her current term.

“I don’t think anyone sets out to be a PVA,” she said. “The office was vacant and several people thought I would be good for the position.”

Technology brought a lot of change to Bushart’s office, as well as those across the state.

“When I came in, we had no computers,” she said. “We had paper cards with Polaroid photos (of properties). Now we have digital photos and GIS. It’s become a finely-run office.”

So far, Jason Neely, Bushart’s son, has filed for the seat in the fall election.

Bushart said she is not sure of what her retirement will entail, aside from spending more time with her six grandchildren and continuing to be active within the community.

One hundred child car seats and booster seats are available for Clark County families, thanks to a grant from the... read more