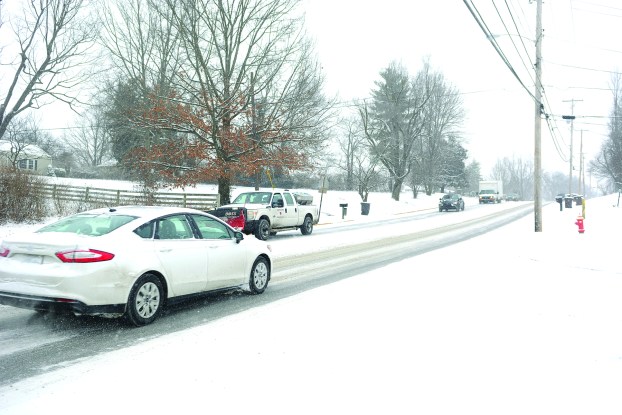 Vehicles drive along a snow-coated Boone Avenue Tuesday after more than an inch of snow fell on Clark County from Monday night to that afternoon. (Photo by Seth Littrell)

Clark County Road Supervisor Kevin Wilson said his workers were out at 1 a.m. Tuesday, spreading one layer of salt before the snow began in earnest. By 1:30 p.m., they were making their second pass over the county with plows.

The snow itself was supposed to be over by mid-afternoon Tuesday.

“We’re trying to get cleaned up enough to go home later this afternoon,” Wilson said. “We’ll hit it again in the morning.”

Another 300 tons of road salt were delivered to the county road garage Tuesday afternoon, he said.

County and city road crews weren’t the only ones out salting and plowing.

“Crews are continuing their efforts to plow and treat routes in their respective counties, with snow amounts reaching anywhere between 2 and 5 inches as of now,” according to a Facebook from the Kentucky Department of Highways District 7 Tuesday afternoon. “A plan has been made to continue working through the afternoon and evening until midnight, then bring crews back at 5 a.m. (Wednesday). If a skeleton crew and/or contractors are needed for interstates after midnight, those will be on call, as well.”

A winter storm warning from the National Weather Service was set to expire at 4  p.m. Tuesday after delivering a couple inches of snow throughout central Kentucky.

In addition to the schools being closed Tuesday and today, the Winchester Board of Commissioners meeting was canceled because of the weather. There will be a special meeting on Jan. 23.