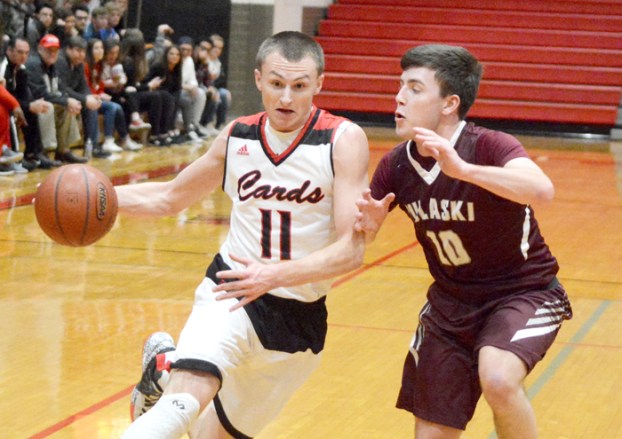 The Cardinals edged the Maroons, who came in ranked in the Top 10.

“This was a good game for both teams with swings and runs and big shots for both sides,” GRC coach Josh Cook said. “They are a team that might be in the state tournament. We didn’t play our best game, but the guys played hard.”

Early mistakes and cold shooting by GRC allowed the Maroons to build an 8-0 lead. But the Cardinals tied the game at 19 just two minutes into the second quarter.

A Chase Taylor 3-pointer with 30 seconds left in the half gave the Cardinals their first lead of the game at 31-30. The two teams were tied at 33 at the halftime break.

In the second half, it was GRC’s turn to build a lead and the Cardainls were up 49-38 with 3:15 left in the third quarter, but Pulaski rallied to tie the game at 51 going into the fourth quarter.

GRC grew another lead, this one a five-point advantage midway through the period. But the Maroons cut that to 74-71 and had the ball with 15 seconds left in the game.

Will Philpot got a clean block on the initial drive to the basket, but the Maroons got the offense rebound. GRC trapped the ball-handler Steven Fitzgerald, who was forced to make an errant pass. That allowed the clock to run out and give the Cardinals a hard-fought win.

The Maroons were playing their second game of the day, as they had been doubled booked in the Jaguar Classic at East Jessamine earlier in the day. The Maroons topped Pleasure Ridge Park, 87-79, before falling to GRC in Winchester.

Taylor finished wth 16 to lead the Cardinals. He was named the player of the game.

“He’s just a solid basketball player,” Cook said. “He just goes out and makes plays. Tonight, he hit some big shots. We found him when we needed to.”

Four other Cardinals were in double figures. Philpot and Brennan Canada each had 13 points while Jordan Graham and Ryan Cooper each had 12.

Fitzgerald finished with a game-high 21 points to lead the Maroons.

Pulaski had been riding a nine-game winning streak until the loss Saturday night. The Cardinals are winners of 13 of their past 14 games.

The Cards travel to Tates Creek Tuesday then return home Friday to take on Montgomery County.

Saturday was full of good basketball game as part of the first-ever Tim Short Automotive Classic.

“For $5, you got your money’s worth,” Cook said. “Our girls got a big win over a good team. It was a good day of basketball.’

Cardinals get big win over Lincoln

The George Rogers Clark High School girls basketball team has lost some tough games to some of the state’s best... read more