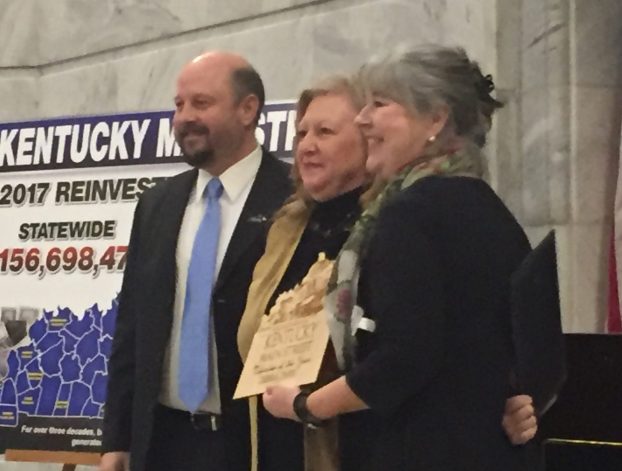 Debra Parr, center, owner of Heart to Home Services in downtown Winchester, and a member of the Main Street Winchester board of directors received the Volunteer of the Year Award at Wednesday’s Kentucky Main street Awards in Frankfort.

A project aimed at promoting downtown Winchester’s real estate potential and a dedicated local volunteer were honored Wednesday with awards from the Kentucky Main Street program.

MSW board member Debra Parr received the Volunteer of the Year Award.

“MSW is community and volunteer-led — these awards showcase that,” MSW Executive Director Rachel Alexander said in a press release. “The Urban Loft Tour would never have happened without Lara Thornbury and Tracey Miller. They pulled in sponsors, tapped into volunteers, organized the properties and got people excited about it.

“And Deb sits on MSW’s board, chairs a committee, leads the Downtown Business Group, is active in the Chamber and owns a downtown business. She always goes above and beyond for this community.”

With the best promotional event award, Kentucky Main Street looks to recognize that downtown promotion can happen in a variety of ways, Alexander told the Sun Wednesday after accepting the award.

“The Urban Loft Tour was more than an event,” she said. “There was a goal in mind from the beginning.”

The Urban Loft Tour featured commercial and residential spaces that have potential for renovation, were in the process of being renovated or that were recently renovated. The goals of the event were to build public awareness of the types of projects happening in downtown, increase interest in upper story living and reinvigorate interest in downtown real estate. The event attracted about 500 visitors.

“We had seen a little bit of slow down in the downtown real estate market,” Alexander said. “Previously, there was a lot of energy and we wanted to keep that up. We also wanted people to see what was going on behind closed doors in downtown. A lot of people didn’t know the various projects that were being worked on. With that, we wanted to show the projects that were in the process and those that had been completed. We hoped to show some of the potential of the spaces that were not yet being utilized. If you can show people what is going on downtown, you can also spark some more interest in upstairs residential property that creates a built-in customer base for the retail and restaurant businesses we are hoping to bring downtown.”

Alexander said those goals were accomplished. A newly-renovated apartment on South Main Street was leased by an event-goer on the spot, and within months, a developer purchased two properties on North Main Street with plans for retail or restaurant space on the first level and upper-story housing.

Because of the success of the local tour, Kentucky Main Street is requiring all 37 Main Street programs implement a similar tour this years through its Upstairs Downtown initiative.

“Seeing so many people come out and get really energized and interested in the project happening was inspiring,” Alexander said.

“It’s people who show their love for the community by giving of their time and talent that are bringing downtown Winchester so much recognition lately,” she noted in the press release.

One of those individuals is Parr, owner of Heart to Home Services on North Main Street.

“Parr has family ties to Winchester and chose to open businesses here because of happy childhood memories, despite an hour commute to her home in Corinth,” the press release said.

Parr’s business was damaged by a fire in June 2017, but Alexander and the rest of the MSW board were inspired by her dedication to the program and her other community responsibilities despite the tragedy.

“Even in that adversity with the fire in the building where her business is located, she doubled down and it was amazing to see how much time she still made available for all the projects she is involved with even in the midst of rebuilding her own business,” Alexander said.

“When looking at the Volunteer of the Year Award, it initially seemed impossible to single out one person to nominate when we have so many outstanding volunteers,” she said. “The commute, the fire, rebuilding her business — a lot of people would have understandably pulled back from extracurriculars. But Deb continued to go above and beyond for MSW and remained active in her other volunteer activities — maybe even more so. That’s pretty remarkable. After such a trying year, it felt right to recognize her for all that she does for this community.”

Winchester Police arrested an 80-year-old man who allegedly assaulted a woman with a light bulb and an Ale-8-One bottle Monday... read more