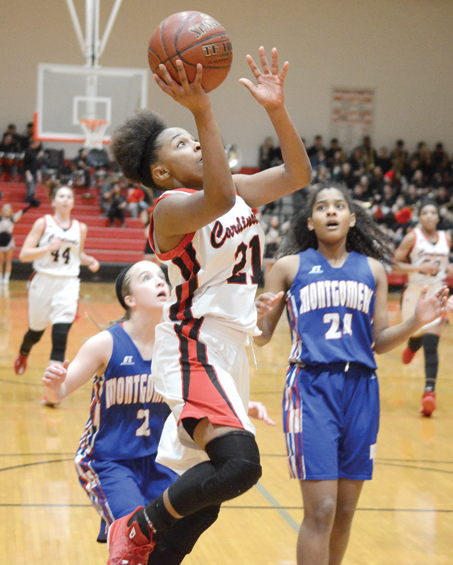 The Indians opened the scoring with a 3-point basket to take a 3-0 lead over 40th District-leading GRC. The Cardinals answered by scoring the next 38 points.

Montgomery didn’t score another field goal until 2:35 left in the half when a shot by Delaney Bromagen made it 40-7.

“We wanted to play pressure defense and contest every shot,” GRC coach Robbie Graham said. “They’re (Indians) down this year and not as strong as Montgomery has been in the past. But they’re playing hard and Beth (Barrier) does a good job.”

Jasmine Flowers and Shemaya Behanan each had 14 points to lead the Cardinals in the win. GRC had 11 different players score.

“Shelbi is strong on both ends of the court,” Graham said. “We want her to be more aggressive. We are confident with putting her on the other team’s best guard defensively.”

The Cards are right back in action tonight, taking on DuPont Manual in the Louisville Invitational Tournament at 5:30 p.m. at Bellarmine University.

The boys team faces Montgomery County tonight at home, tip-off is set for 7:30 p.m. GRC students are planning a “white-out,” asking Cards supporters to wear white for the game.