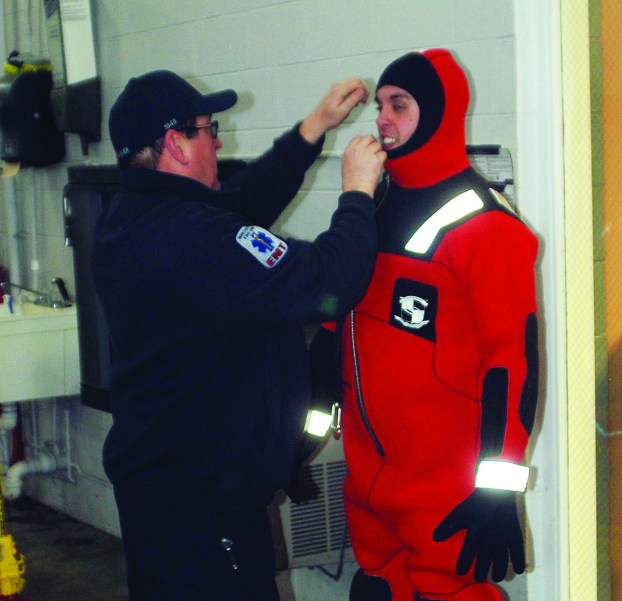 Those days are long gone.

Now firefighters are trained in far more than fighting fires. Emergency calls now include everything from assisting ambulances to removing patients from crashed automobiles, leading ground searches for missing people to pulling them from flood waters, even rescuing large animals.

Clark County’s two fire departments, Winchester Fire-EMS and Clark County Fire Department, are both trained in multiple areas of rescue, and interact with each other regularly on emergency calls. Sometimes one agency has the gear and the other has the additional manpower. Sometimes it’s reversed. It all depends on the call.

It’s the result of decades of work by the city, county and the firefighters themselves. It’s an investment by all to meet the needs of the community when bad things happen.

Rescue needs and capabilities have increased tremendously in the last few decades.

“Thirty or 40 years ago, it was just a fire department,” Clark County Fire Capt. Steve Asbury said. “You’ve got to keep up with the times.”

“Along came the necessity to do large machinery,” he said. “We learned rope rescue with those. Sometimes there were places you couldn’t reach for extrication.”

The need to increase water rescue training came in response to a call.

“We had a couple people that needed to be rescued and we realized we weren’t trained properly,” he said. “It just grows, one discipline on top of another.”

“We’ve always had a little bit of stuff,” Winchester Fire-EMS Capt. Scotty Highley said. “We saw a need as a department to step up for the community.

The two departments have a reciprocal agreement to back each other up on specialized calls. Recently, Winchester Fire-EMS was called to an incident where a car struck a house and caused structural damage. Clark County Fire responded with its structural and trench rescue trailer, which carried wood and carpentry tools to stabilize the house until professional repairs could be made.

“We’ll have the equipment and they’ll bring the manpower,” Highley said. The opposite can be true as well, depending on the call and location.

In the last year, Clark County Fire Department has been called to assist with trench rescues in Madison and Montgomery counties.

“Everything we put in place all these years is finally coming to fruition,” Clark County Fire Battalion Chief Ben Wright said. “We’re very prepared if it ever happened here. We’ve been called by two different jurisdictions. That validates what we’re doing.”

Having the capability to handle any type of rescue comes with a cost, both on the part of the departments and on the firefighters to get the necessary training.

Winchester Fire-EMS is awaiting delivery of its new rescue truck, dubbed Rescue 2, in late February or early March. The truck will replace a previous engine which was totalled following an accident in 2016.

“It was a very intense process,” he said. “There’s a lot we wanted to do with it. It’ll house all our extrication equipment. It has anchor points for rope rescues.”

For comparison, Lexington Fire Department unveiled its new dedicated rescue truck in December. Their Rescue 1 cost $826,278 to build and carries another $91,483 in gear, according to published reports. Lexington Rescue 1 will respond to the same types of rescue calls as Winchester and Clark County, with the addition of a dive team and a continuous air supply for firefighters.

Winchester’s new truck, though, has a pump, water tank and hose for fighting fires.

The city also spent $100,000 in the last two and a half years to purchase new vehicle extrication tools with higher capabilities for current vehicles, Highley said.

Clark County Fire used a heavy-duty four-wheel-drive pickup truck with a utility bed as its special operations truck to pull trailers for water rescues or building and trench collapses.

“For us, it’s the perfect size,” Clark County Fire Battalion Chief Ben Wright said. “It gets us and the equipment where we need it to be.”

Clark County firefighter Kevin Osborne said the department recently completed reconfiguring its water rescue trailer to include storage for the rescue boats and equipment as well as changing stations and dry suits for multiple firefighters.

For the rest, it’s difficult to calculate the cost as equipment was acquired over time, Wright said.

To do the job properly, the correct gear has to be in place. And each type of rescue requires different tools.

For auto extrication, there are the hydraulic cutting tools, often known as the Jaws of Life. Accompanying those are spreaders, a generator, hydraulic lines and composite or wooden units to stabilize the vehicle. The trucks also carry airbags to life vehicles.

For rope rescues, there are hundreds of feet of rope, harnesses, carabiners and safety helmets.

There are air hammers and chisels. Blocks and tackles. High lift jacks and regular bottle jacks.

They laugh that adding the word ‘rescue’ to any piece of equipment automatically raises the price of the item. And everything has a shelf life, even the lumber, and has to be replaced regularly.

The most used equipment, according to both departments, are the auto extrication tools, which are used to help remove patients from vehicles in accidents.

“I like that we have them, but I hate to use them,” Osborne said.

The Kentucky Fire Commission requires firefighters to complete 400 hours of training to be a certified firefighter.

Those training hours cover the basics of firefighting. Specializing and earning certifications on other disciplines takes much, much more.

“Everyone gets the basics in recruit class,” Highley said. “As a department, we probably have close to 20 who are cross-trained. This is more of a specialty.

There are levels of training for rescues. The first step is awareness, which is a basic level, Osborne said. They are able to identify the situation and can help other firefighters in the actual rescue, he said. Operations level is next where, in a trench rescue, the fire fighter can carry tools and go to the edge of the trench but not enter, he said. Technician level would allow the firefighters to actually enter the trench or, in a water rescue, go into the water for the rescue, he said.

“I’d say 90 percent (of firefighters) are technician level in most of our disciplines,” Osborne said.

Firefighters can also train to become instructors in the various disciplines to teach others, either within the department or outside.

Wright said Clark County has three rescue instructors in house to lead training for their own firefighters and for other departments.

“In the last two or three years, we’ve grown by leaps and bounds by equipment and training,” Wright said. “The equipment we have is the equipment we use. We’ve gotten some amazing equipment that makes it safer and easier.”

It doesn’t mean there aren’t plans and dreams for more growth.

“Our next project is our collapse and shoring trailer,” Highley said. “It’s going to be carrying a lot of lumber.”

There has been a lot of improvement and expansion of a fire department’s duties, and the public’s expectations, in recent decades. The firefighters keep stepping up and improving to serve the community, they say.

“We all want to be helpers and firefighters,” Highley said. “We’re going to be here to help people.”

There is an expectation, Wright said, that the fire department should be able to handle anything.