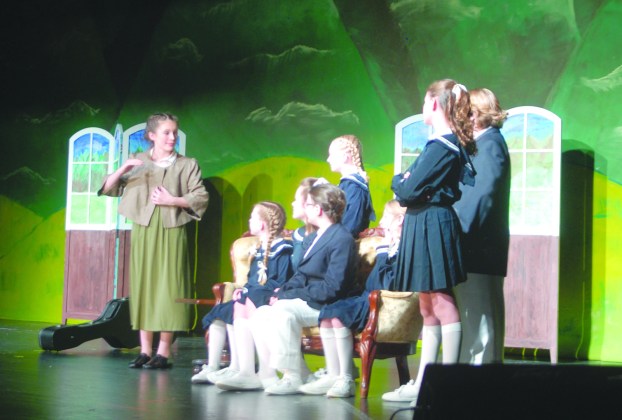 Maria Rainer, portrayed by Ella Brock, teaches the Von Trapp children how to sing during Baker Intermediate School's production of "Getting to Know ... The Sound of Music" Sunday at Campbell Junior High School. The cast includes more than 50 studenta. (Photo by Fred Petke)

School comes alive with ‘The Sound of Music’

Special to the Sun

Nearly 650 people attended the public performances of “Getting to Know The Sound of Music” by Baker Intermediate School’s theater program this weekend.

The cast featured 48 fifth- and sixth-graders who brought to life the classic story of faith, family, and courage in 1930s Austria.

“These actors have been working tirelessly since August, when auditions were held,” said Ian Farrell, one of the two directors. “They have had rehearsal three days a week since September, and without a doubt, that dedication is what made this production so spectacular.”

“It has truly been a privilege to work with these students,” said Katie Berner, the other director. “Over the past five months, I have watched them develop as actors and as individuals.”

The cast had a great deal of fun as well.

“It was very fun to be in the play, because you meet so many new people and then the cast members become family,” said Saylor Gladden, a sixth-grader who played Brigitta von Trapp.

“The people involved were so much fun,” she said. “The cast members were inspirational, the directors were very enthusiastic and helpful, and the backstage crew was marvelous.”

The Baker Theatre Department is planning its fourth annual production in 2019. In the meantime, many of the cast members will participate in a variety of roles around Winchester.

The program drew audience members from as far away as Florida, Maryland and Minnesota.