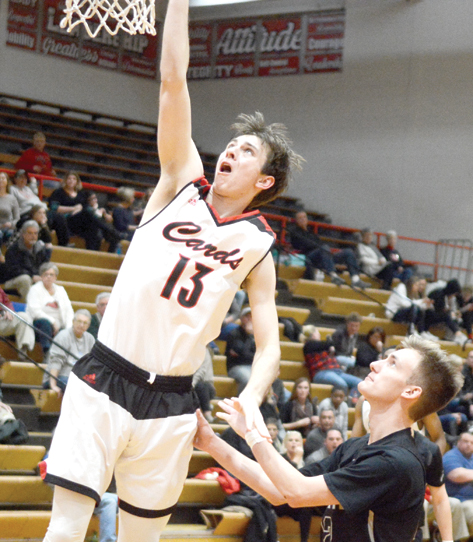 In what George Rogers Clark High School boys basketball coach Josh Cook called a tournament atmosphere, Clark held on to win the battle of the Cardinals against South Laurel Tuesday in Winchester.

After both teams went on early runs, it was nip and tuck the rest of the way with GRC pulling out the 55-51 win.

“We showed some toughness and leadership tonight,” Cook said. “We had a heart-to-heart last night (after the win over Bourbon County).”

GRC opened with a 10-0 start but South Laurel followed with an 11-0 run to take the lead. The first quarter ended with Clark holding a 14-13 lead.

Brennan Canada put in a bankshot after an offensive rebound just before the end of the second quarter, giving GRC a 32-31 edge at the halftime break.

Ben Jackson scored just before the end of the period to put GRC up 41-39 going into the fourth quarter.

South Laurel took a 45-43 lead with five minutes remaining in the game but a Ryan Cooper 3-pointer gave GRC the lead back.

Clark got a pair of defensive stops take a 50-45 advantage and the home team was able to hold off South Laurel down the stretch.

“I’m tickled for our guys,” Cook said. “We made some mistakes, but we showed some championship poise.”

Despite playing the fourth game in five days, GRC was able to shoot nearly 50 percent, making 19 of 40 shot attempts.

GRC had 10 different players score in the victory, led by Canada’s 17 points.

Only four players scored for South Laurel, but three of them were in double figures — Mathew Cromer scored a game-high 26 points, Ryan Anders put in 13 and JJ Ramey scored 10.

The Cardinals get a pair of off days before hosting Mason County Friday night at 8 p.m. The Royals are 12-9 and coming off a 58-52 win over Montgomery County at home.

Cards still perfect in 40th District after win at Bourbon