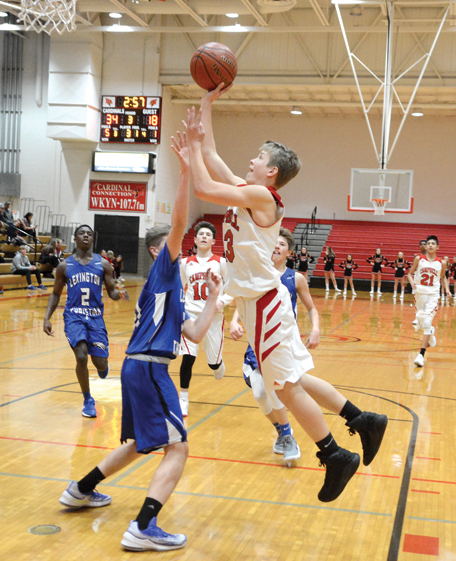 The Campbell Junior High eighth-grade boys basketball team has earned its way into the conference tournament championship game thanks to a win over Lexington Christian Thursday at home.

The Cardinals held off an LCA push in the second half and pulled away for the 63-37 victory in the semifinal round.

RDC seemed to be in control and coasting in the third quarter when it opened up a 38-18 lead, but the Eagles finished the period on a 13-2 run and were down by just nine going into the fourth quarter.

LCA added a free throw just after the start of the period to trim the lead to eight at 40-32. But the Cardinals had the answer, going on an 18-2 run to take a commanding lead and put the game away.

Hagan Harrison scored a game-high 14 points to lead the Cardinals. Jerone Morton, Jeremiah Mundy-Lloyd and Carter Lowe each had 13 points apiece in the win.

Now the Cardinals look to win the Bluegrass Middle School Conference title when they travel to Royal Spring Middle School Tuesday for a night of title games.

The sixth-grade Cardinals will also be in action. They will tip off at 5:30 p.m. while the eighth-graders are set to play at 7:30 p.m.