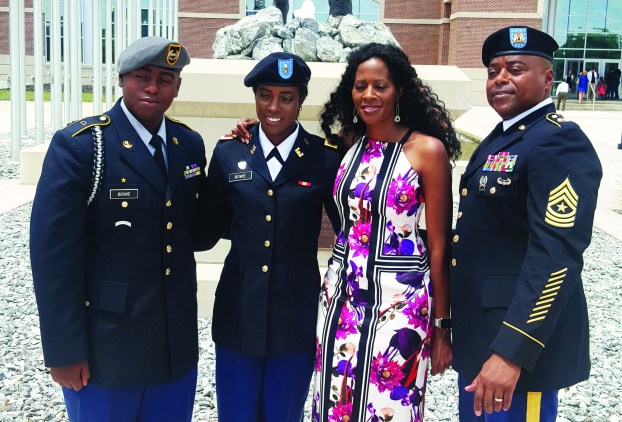 U.S. Army Sgt. Maj. Dana Bowie (Ret.), far right, will be the keynote speaker at the Winchester Black History and Heritage Committee’s banquet Feb. 24. The GRC graduate is pictured with his wife, Kimberly Clark Bowie, also a GRC graduate, and their children.

When Dana Bowie enlisted in the U.S. Army, he was looking for an avenue to earn a college education.

It turned out to be much more.

Bowie moved to Winchester with his step-father and mother in the fall of 1981 during his senior year of high school. He graduated in June 1982 and “did some odd jobs” before joining the Army.

“My cousin went to the Air Force for two years and when he got out, the Air Force paid for his college,” Bowie said. “He was able to get his bachelor’s degree. So I initially signed up for only two years because I wanted to go to college.”

During those two years, Bowie discovered he liked the job.

“I figured it was an OK job, so I re-enlisted for four years and just kept going from there,” he said.

Bowie served nearly 30 years before retiring as a sergeant major in 2012. Those years included various overseas tours serving in communications for the military.

“The job changed throughout the years,” Bowie recalls. “Initially, I was a combat telecommunications center operate and then a tactical message center operator. I would be in the middle of the desert and help set up a van on the back of a five-ton to send messages back and forth from different commands and Washington, D.C. It was sending secure messages.”

That was “way back then,” Bowie said. Technology changed the field along the way.

“While there I was a battalion operations sergeant major,” he said. “We were responsible for the communication at 14 different operating bases.”

In 2012, Bowie and his wife, the former Kimberly Clark of Winchester and a fellow GRC graduate, retired near Fort Gordon, Georgia, where they bought a home.

He still makes regular trips to Winchester, where he was the administrator of his late mother’s estate until recently and to visit his in-laws.

The banquet is scheduled for 2 p.m. Feb. 24 at First Baptist Church.

Fittingly, Bowie will speak about his time in the military to coincide with this year’s national Black History Month theme, “African-Americans in Times of War.”

According to the Association for the Study of African-American Life and History, the founding agency of Black History Month, this year’s theme commemorates the centennial of the end of World War I in 1918.

“(The theme) explores the complex meaning and implications of this international struggle and its aftermath,” according to the ASLAH theme announcement. “The First World War was initially termed by many ’The Great War,’ ‘The War to End All Wars,’ and the war to ‘make the world safe for democracy.’

“Those very concepts provide a broad and useful framework for focusing on the roles of African-Americans in every American war, from the Revolutionary War era to that of the present ‘War Against Terrorism.’”

Bowie said he will speak about his own experiences and give special credit to military families.

Bowie himself grew up the child of a military parent. His step-father also served in the U.S. Army before retiring to Winchester.  Bowie’s daughter, Jasmine, has followed in her father’s footsteps. She was recently promoted to first lieutenant in the U.S. Army. She serves as a platoon leader with the 55th Engineer Brigade at Joint Base Lewis-McChord in Washington. His 16-year-old son is a student at Camden Military Academy.

With that in mind, to speak about the experience of African-American veterans is a special occasion for Bowie.

Bowie said the military is especially important in regards to the African-American community because of the environment of fairness offered to those who enlist.

“The military has been fair to black Americans,” Bowie said. “What it’s done is give a level playing field that anyone who comes in can excel on. One of the things I really like about the military is that, especially in the Army, we’re one color. We’re green. Everyone has the same opportunity to excel, and there are checks and balances in place to make sure that is the case. If you can do your best and put your right foot forward, you can be successful.”

And that fairness is something Bowie hopes can be an example to the rest of society.

“The military is a reflection of the society,” he said. “Everyone who comes in, they’re from different places. They do their time and they see that there is fairness. Everything is not always right, there are things that need to be fixed everywhere, but there is fairness. If, once we step back into society, we can try to bring those things to those around us, to teach about fairness, then we can change those around us.

Joyce Morton, chairwoman of the Winchester Black History and Heritage Committee, said the group decided to focus on celebrating veterans with one large event this year.

“We usually do two or three events throughout the month,” she said. “But with this theme, we wanted to do a big celebration for all veterans.”

She said the theme is fitting as the committee recently invited a 94-year-old African-American veteran to speak on Veterans Day and they were enlightened.

“We were captivated as he talked about the Red Ball Express,” she said. “He told us so much that I had no idea about. And on a personal note, my husband is a Vietnam veteran, so I think it’s very important to thank anyone who has served. We are glad to be able to say ‘thank you,’ especially during Black History Month.”

Morton said the committee was formed in 2014 at a time when America was seeing frequent racially-charged shootings.

“We were seeing nothing but negativity everyday in the newspapers and on TV,” she said. “We wanted to do something to change the image that black men are bad people. We started enrichment programs and reached out to the health department, the library and the museum. We partnered with these agencies in efforts to show that we are just like everyone else.”

The committee and its impact continues to grow, Morton said, and she continues to discover more about the history of African-Americans in the community.

“It has been awesome to learn that we have a history, just like everyone else,” she said. “Every little piece that we continue to learn makes us more and more a part of the fabric of Clark County.”

And much of that impact is on the part of the brave men and women who fought for freedoms they were not always afforded, she said.

“When my husband went to war in Vietnam in 1968, he went to fight for something that he did not have here,” she said. “When he came back from fighting for the freedoms of someone else, he came back to fight for his own freedom in America. And we are still fighting in many ways today.”

That sentiment reflects the mission of the national theme.

“This is a theme filled with paradoxes of valor and defeat, of civil rights opportunities and setbacks, of struggles abroad and at home, of artistic creativity and repression and of catastrophic loss of life and righteous hope for peace,” according to ASALH.

The two men charged with participating in an armed robbery for cash sent their cases to the grand jury for... read more