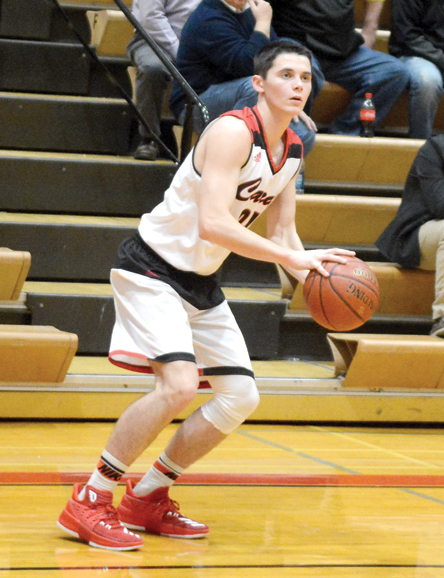 It took a while for the Cardinals to get past their emotions Monday night, but once they did, the George Rogers Clark High School boys basketball pulled away from visiting Madison Southern, 78-63.

GRC honored its seniors prior to the game — Ryan Cooper, JJ Johnson, Will Philpot and Chase Taylor. That could explain why the Cardinals were a little cold in the early-going.

“It’s an emotional night for them,” Cook said. “I wish we could do senior night when the season is actually over. These kids want to play a lot more basketball. They fought and found a way to get the win.”

It didn’t appear to be a drag on the Cardinals in the opening minute, at least for Johnson, who got an offensive rebound and putback for the game’s first points and took a charge on the other end on Southern’s first offensive possesion.

But the Eagles got hot while GRC struggled. Southern led 15-7 during the first quarter and 22-13 in the second. The Cardinals when on a 15-3 run in the second quarter and claimed a 33-28 edge at the halftime break.

“They spread you out and you have to weather their runs,” Cook said. “They made some tough shots. Our traps weren’t as good as they have been. Offensively, we found a way to come out with the win.”

And part of that answer to fight fire with fire. Southern loves the 3-point basket, attempting 31 on the night and making a dozen of them. But the Cardinals were more efficient, hitting 10-of-19 from behind the arc.

Cooper led the charge with five of them.

“Teams are going to play zone against us because of what Philpot can do inside and that gives him (Cooper) open looks,” Cook said.

The Eagles tried a 1-3-1 zone in the first half and went to a triangle-and-2 in the second half.

“I was proud of our guys when they went to the triangle-nad-2 and we cut it up,” Cook said. “We showed we have guys who can score. It was good to see us respond to that.”

Southern falls to 10-14 on the season while the Cardinals improve to 23-3. The win is the 13th straight for GRC.

The Cards go for the season sweep of the 40th District Thursday when they travel to Montgomery County (11-12). Tip-off is set for 7:30.

GRC already has the top seed in the district tournament, which will be held at Montgomery later this month.