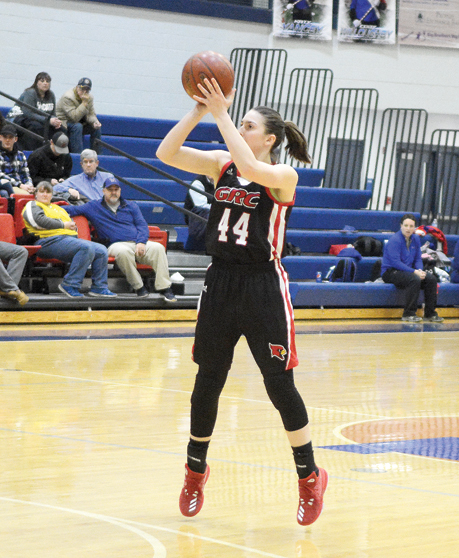 The Cardinals rolled to a 73-16 victory, boosting their record to 19-6 on the year and 6-0 in league play. The Indians fell to 7-19 and 0-6 in the district. The two teams will meet again in the opening round of the district tournament later this month.

While the Indians were without their top scorer, Delaney Bromagen, and primary ball-hanlder, Bailey Cobb, the Cardinals were also without a starter with Shemaya Behanan missing the second game in a row.

GRC was also without coach Robbie Graham, who was out for the contest for a family member’s medical procedure.

Under the direction of assistant Steve Anderson, the Cardinals opened a 9-0 lead to start the game and were up 35-6 halfway through the second quarter.

Kennedy Igo scored a game-high 19 points to lead the Cardinals. Hayley Harrison scored 11 points, but passed up some scoring opportunities in the first half to make the extra pass — that earned her a call from Graham who was listening to the radio broadcast. He wanted Harrison to be aggressive and take her shot.

Shelbi Wilson also scored 11 points, getting back in action after missing a pair of games after an illness.

“She was struggling a bit with her confidence after being on the sidelines for a couple games,” Anderson said. “So it was good to see her play well tonight.”

Chloe Treece was also in double figures with 10 off the bench for GRC.

“We’ve been working Chloe Treece and Cameron Anderson into the rotation lately with the number of people we have down right now,” Anderson said. “Chloe got her chance tonight and made the most of it.”

The Cardinals stay on the road for a visit to Madison Southern Friday before returning home to take on Frederick Douglass for senior night Tuesday.

It took a while for the Cardinals to get past their emotions Monday night, but once they did, the George... read more