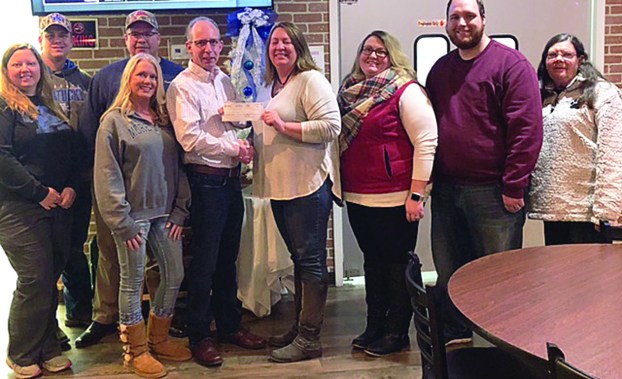 A Time To Live President Kim Moore presents a check for $7,700 to Friends of the Clark County Animal Shelter President John Blanton. The money was saved by ATTL in order to purchase a new van to be used for transporting shelter animals to out-of-state rescues. FOCCAS recently assumed responsibility for the purchase of a new transport van. (Photo submitted)

Volunteers have raised more than half of the money needed to purchase a new transport van for the Clark County Animal Shelter, but help is still needed

The funds are being raised by Friends of the Clark County Animal Shelter, a new non-profit formed specifically to meet this need at the shelter.

So far, $21,450 has been raised toward the cost of a van that will replace one totaled in a wreck in January.

“The van rolled to its side and skidded down the highway for some distance before coming to a stop,” according to a FOCCAS Facebook post. “The driver was transported to the hospital with a severe injury to his arm.

“Miraculously, all of the animals were accounted for and none were seriously injured. The driver is still recovering but is expected to be fine as well.”

The already aging van was not fine, though.

FOCCAS is asking for donations toward a goal of raising $40,000 by Feb. 15 to replace the van.

The previous van was purchased in 2011 by A Time To Live, another volunteer agency dedicated to offering support for the shelter, using a PEPSI Challenge grant. Part of the money raised so far included $7,700 that had been saved by ATTL toward the purchase of the new van previously.

Shelter Director Adreanna Wills said the van was used about twice a month to transport animals to rescue groups in the northeast.

Since the van was purchased in December 2011, 4,640 animals were transported from Clark and surrounding counties to approved rescues that ultimately help find loving, forever homes for the animals, Wills said.

She said in Clark County, 97 percent of dogs that are housed at the shelter will eventually find placement — largely thanks to the partnership with the rescue groups and volunteers from A Time To Live.

Nine out of 10 dogs adopted through the local shelter are actually adopted by rescue groups.

According to FOCCAS, “In 2017, 844 adoptable dogs found their way to the Clark County Animal Shelter, only 62 of those dogs were adopted to families locally, the remaining dogs would likely have faced euthanasia if it weren’t for the transports made possible by this van. “

Wills said the group is still waiting to hear back from a local car dealership about a van.

“We are hoping they will reduce the purchase price and that would bring us closer to our goal,” she said. “Multiple businesses around town have fundraisers set up and donation jars on display.  We are thrilled and appreciative of the support we are seeing from the community.”

Donations can be made at www.friendsoftheclarkcountyanimalshelter.org or by mail to Friends of the Clark County Animal Shelter, P.O. Box 4795, Winchester, KY 40392.

The man accused of leading Winchester Police on a pursuit in a stolen car last month sent his charges to... read more