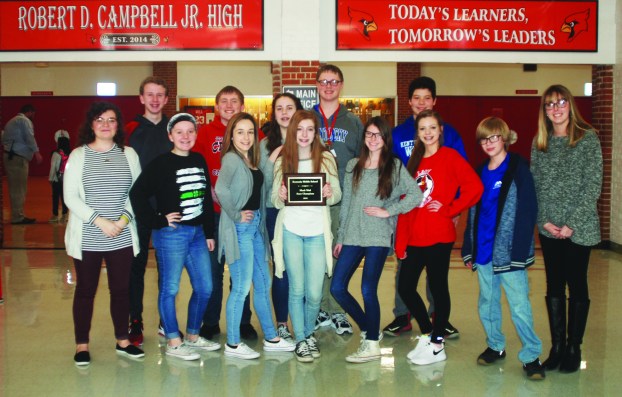 The competition is for teams of seventh and eighth-grade students in Kentucky.

This is only RDC’s second year having a team.

“We were really nervous. We weren’t necessarily expecting to win with all the snow days and missing practice, but I thought our kids performed well under pressure,” said Amber Murphy, a language Arts teacher and mock trial coach. “It was a really hectic day because we were running around crazy trying to find out what courtroom we were in. Now our students understand why we pushed them so hard.”

In the last trial, the seventh-grade and eighth-grade teams competed against each other with the eighth graders coming out on top.

“I was really nervous because it was my first time and I had only practiced my witness part for two weeks. We normally had really good practices so that gave us a little more confidence,” eighth-grader Lyndsay Howard said.

Individual awards were given out to each team in the tournament. Claire Martin and Ben Riley received “Best Attorney” award while Cooper Kincaide and Giddeon Wilson received “Best Witness” awards.

Each year, a new court case is presented and teams will have to start from scratch.

This is the first of a series of 20 articles that first appeared in the Winchester Sun in December 1919... read more