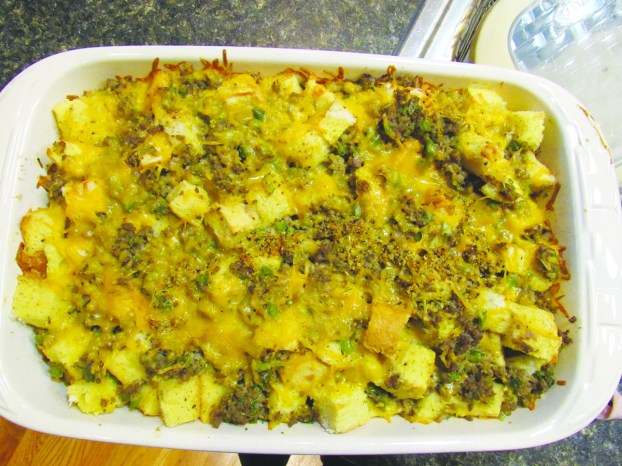 Nailed It or Failed It: Easy breakfast strata

As my turn to take snacks to church was arriving I started looking through my breakfast folder for something new to make.

I knew I was going to make orange-date bread (you read about that last week) so I was hunting for something that would be warm when eaten.

This recipe for Easy Breakfast Strata did sound easy and it didn’t require any outlandish ingredients. I pulled it out of the folder and set it aside so I’d have it when I was making my grocery list for the upcoming weekend.

My first stop at the store was the produce department and I put a pretty big green bell pepper in my buggy then headed to the bakery department to get a loaf of herb or cheese bread.

First I checked out the day old section, but didn’t see anything there. When I went to the fresh section of the bakery I kept going round and round the display thinking I’d spot a loaf of one of these kinds of bread. Honestly I’m surprised someone from the Bakery didn’t come up to me and ask if they could help me because I really did go round and round that display a few times looking at every loaf of bread they had,

I guess I thought either a loaf of herb or a cheese would appear if I just looked long enough. In the end I opted for a loaf of Italian bread.

Now I was off to the meat department for sausage. Since the recipe didn’t say if the sausage was supposed to be mild or hot, I decided since the bread was plain I’d use hot sausage. After finding everything else on my grocery list I headed home.

After putting all the groceries away and fixing lunch, I prepared the orange-date bread then went right to work putting this dish together.

I chopped up the green pepper and the onion and placed them, along with the sausage, in a large sauce pan. I got to work using my food chopper to break the sausage up into very small pieces. I wanted to make sure the sausage was done so I cooked it for quite a while. When I was satisfied, I drained all the grease and set it aside while I cubed up the bread.

I greased a 9 x 13 dish and as I cubed the bread I added it to the pan. It sure seemed like there was a lot of bread. When all of the bread was in the pan I sprinkled the sausage mixture over the top and stirred it just a little. I knew I wasn’t going to eat this dish, but I thought if I was, I’d want the meat and vegetables mixed in with the bread not just lying on top.

I sprinkled the shredded cheese on top then beat the eggs in a small bowl, added the milk and then grabbed the yellow mustard from the refrigerator. I read the recipe again and was glad I did because it called for ground mustard, not what I had in my hand.

I pulled the dry kind from my spice drawer. After mixing those three ingredients with a whisk, I wondered if the dish would need some herbs since the bread was plain and so for good measure I sprinkled a little bit of Mrs. Dash in and mixed it up. Then I poured the liquid all over the bread and sausage mixture.

In the past, the eggy dishes I’ve prepared similar to this one all called for a lot more eggs than this recipe did. I hoped there was enough liquid for all of the bread in the pan.

After covering the dish, it went into the refrigerator to rest overnight.

Sunday morning arrived and I got the strata out of the refrigerator while I got ready for church. After about 30 minutes I put the dish in my preheated oven and let it cook for 30 minutes. I tested it with a knife and the knife came out clean so I removed it from the oven. I offered Brad a little piece and he said sure. My thought was if it wasn’t good we still had time to run somewhere and get a substitute.

When he took a bite he said it had too much bread and not enough egg for him. I asked him if he thought it was done and he said yes, but he thought I should let it cook a bit longer and maybe the eggs would firm up, they were a little “wet” for his taste. I popped the dish back in the oven for five minutes and then it was time to head to church.

When I arrived in my Sunday School classroom, the people there were anxious to see what I’d brought. I told them I needed their honest opinion about whatever they tried. I hoped and prayed the breakfast strata was done enough for everyone.

As people began to eat, I started seeing smiles and getting nice comments. One person asked what kind of spice I’d use and I told her about using hot sausage. Others around her started shaking their heads yes, agreeing they tasted the spice. I told them I’d used hot sausage since the bread was plain. They didn’t think it was overly spicy, but I’ll caution you that if you don’t really like hot sausage or spicy, use mild.

When we got home, Brad heated up the leftovers for lunch. After finishing it off, he said it was good. He didn’t think it was too hot, but he still thought there was too much bread or not enough egg.

When Brad first tasted this recipe I thought for sure it was going to end up a failure, but after comments from our friends, I’ll have to say I nailed this recipe and I’ll hang on to it for my self-made cookbook, with a note to make some kind of adjustment for Brad’s taste (probably less bread).

In a large skillet, cook the sausage, pepper and onion over medium heat until meat is no longer pink; drain.

Place bread in a greased 13×9 inch baking dish. Top with sausage mixture, sprinkle with cheese. In a large bowl, whisk the eggs, milk and mustard. Pour over the top. Cover and refrigerate overnight.

Remove from the refrigerator 30 minutes before baking. Bake uncovered at 350 degrees for 30-35 minutes or until a knife inserted near the center comes out clean. Let stand 5 minutes before cutting.